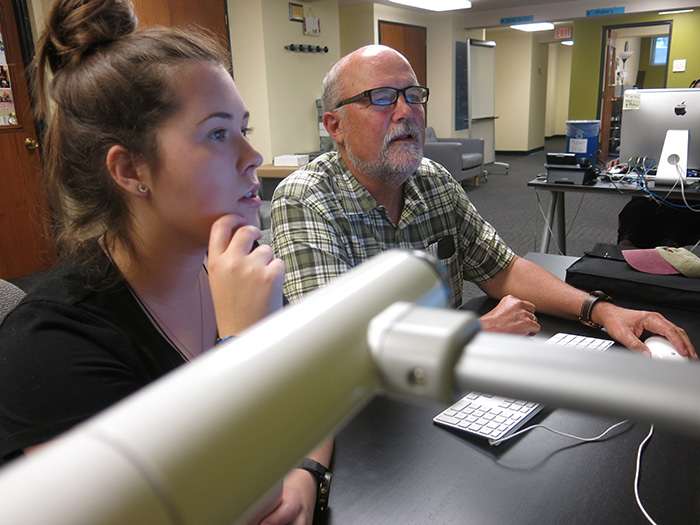 Kerin Maguire '17 and Ashton Nichols comb through the new Web portal they created as part of a student-faculty research project. Photo by Tony Moore.

In his acclaimed book Beyond Romantic Ecocriticism: Toward Urbanatural Roosting, Professor of English and Environmental Studies Ashton Nichols posits that human and nonhuman lives—and animate and inanimate things—are interdependent in complex ways. Instead of romanticizing our understanding of “nature” as something hallowed and separate from our urban lives, we might seek out the many ways in which nature interacts with the urban, and urbanity with nature—hence his term, “urbanatural.”

“Readers and critics liked the idea as an abstract concept, but they wanted to see examples—where it is put into practice, and how it might be applied elsewhere,” says Nichols, the Walter E. Beach '56 Distinguished Chair in Sustainability Studies. So he teamed up with a tech-savvy student-researcher and got to work.

In an eight-week student-faculty research project funded by the Digital Humanities program, Nichols and Kerin Maguire ’17 created a Web portal outlining urbanatural synchronicity in contemporary urban, rural and wild settings. Edited by Nichols, Urbanatural Roosting: Planetary Living for the New Millennium presents Nichols’ and Maguire’s research on the topic while also opening up the conversation to others working in sustainability, the natural sciences, philosophy, urban planning and related fields.

It is the second scholarly Web portal created by Nichols, who launched Romantic Natural History—a site that corrals information about pre-Darwinian views of the natural world—nearly 20 years ago.

Finding the right research partner was key. An English major and John Montgomery Scholar who writes and records original music, Maguire read Urbanatural Roosting as part of Nichols’ Nature Writing course, and was a standout student in that class. When Nichols learned that she also works as a student-assistant in the Media Center and maintains a substantive music-review blog, his choice was clear.

“Kerin's blog had so much sophistication and clarity, and she's a strong writer and collaborative researcher who clearly had a lot of experience with WordPress software,” says Nichols. "She was an ideal match for the project."

Sharing with the world

The student-faculty team worked with Ryan Burke, Web development specialist, and Brenda Landis, multimedia specialist, to hash out the site architecture and develop a fresh, contemporary design. Maguire migrated relevant content from Nichols’ earlier blog and also researched and wrote a dozen posts about urbanature in action. Nichols also researched and wrote new content and edited Maguire’s posts, soliciting her feedback on his own writing as well.

“It involved a lot of reading … Professor Nichols just kept handing me these stacks of books,” Maguire says with a laugh, “but now that I know a little more about this topic, I am interested and invested. It reels you in.”

As the weeks progressed, Maguire began to find connections to the work during non-research hours; an article in her hometown newspaper, for example, was the catalyst for her final post of the summer. She also uncovered environmental issues in familiar settings—in the Pinelands National Reserve in her home state, and along the fragile shoreline of Cape Cod, a favorite family-vacation spot, where the population has increased 400 percent in the past 40 years, creating significant pollution.

“I go there all the time, and I never knew there was a problem,” says Maguire, who plans to continue contributing to the portal, at Nichols’ request. “Once you learn about statistics like that, how can you not want to share them with the world?”