Winners advance to the national round, which is broadcast live in China 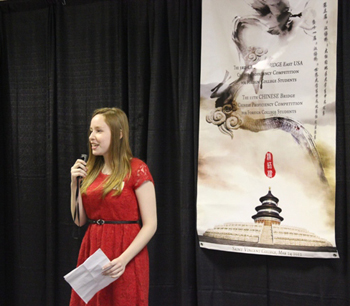 The Chinese Bridge Speech Contest is a national competition that awards one student a scholarship to study in China courtesy of the Chinese Ministry of Education. Contestants deliver a speech and a performance that reflects their knowledge of Chinese language and culture. After the regional competition, winners advance to the national round, which is broadcast live in China.

Each contestant chose a personal topic of interest for their speech and performance, focusing on their relationships or experiences with Chinese culture. Allapur, an international-studies major, spoke about his gap year in China and recited the poem, “Gitanjali,” by Rabindranath Tagore.

“I focused on my relationship with my host father and helping him deal with his divorce, which took place a few days before I arrived in China,” he says.

Holtz chose to link both her speech and performance to a specific childhood event, continuing the theme of family and relationships.

An East Asian studies major, Lawson focused his speech on his relationship with his study-abroad host grandparents, followed by a rendition of Cui Jian’s “Rock ‘n’ Roll on the New Long March,” one of the first popular rock songs in China that speaks of modern working-class struggles.

“My host grandparents were my key to seeing the real side of China,” he says. “Their stories are quite touching and help the audience see a different side of these people.” Lawson notes that his expressive Chinese and personal take on the issue help him stand out at the contest.

“In China, everything goes back to relationships and performance,” he adds. “Respect and competence are important in building relationships between nations, peoples and friends.”

“I am very proud of all our students,” said Rae Yang, a judge in the contest and associate professor of East Asian studies at Dickinson. “They worked hard to prepare and practice. I’m especially proud of Holly, who won first place as a first-year student against many sophomore students.”

Dickinson students have competed and placed in previous years as well. In 2010, two students, James Watson-Krips ’10 and Megan Rosenberg ’13, advanced to the final round after their regional performances. This year’s success in the competition shows the expansion and development of Dickinson’s Chinese program, which continues to gain recognition.

Read about Dickinson's admissions initiatives in Asia, the Department of East Asian studies and the college's grant from the Henry Luce Foundation’s Luce Initiative on Asian Studies and the Environment.