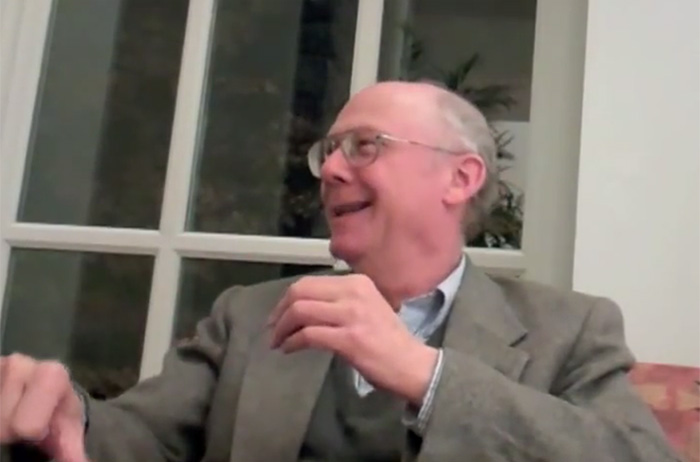 “It's a huge honor for all of us,” said Alex Kasznel ’15, who created the video along with classmates Matt Schwartzman, Jennifer Azarow and Christina Errico. “This was definitely one of the most rewarding projects I've ever done.”

Developed as an assignment for a first-year music-history seminar taught by Associate Professor of Music Amy Wlodarski, the video chronicles two moments of Dickinson’s engagement with the legendary composer: April 8, 1970, when Cage visited campus to accept the college’s Arts Award; and November 12, 2011, when visiting musicians Third Coast Percussion marked Cage’s 100th birthday by performing his works on campus.

Students in Wlodarski’s music-history seminar and students in Associate Professor of Music Jennifer Blyth’s music-performance seminar studied Cage throughout the fall semester. The performance students played Cage’s “Radio Music”—which uses radios, tuned to different stations, in place of traditional instruments—as part of the November concert, and the music-history students captured reactions to the work on video. Wlodarski’s students also filmed interviews with Dickinsonians who had attended Cage’s 1970 performance on campus: President William G. Durden ’71; former music major Joe Sobel ’70, who had delighted Cage with a handmade instrument made from car horns; A. Pierce Bounds ’71, who photographed the concert; and music professors emeriti Beth and Truman Bullard.

“The whole production went perfectly, and I was floored by the work that they put into it,” said Multimedia Programmer Brenda Landis, who, with Multimedia Special Instructor Andy Petrus, taught the students to record and edit the video.

“The head of that archive noted not only the high quality of the submission, but also that it was the first student submission to the Web site,” Wlodarski said.