More Than a Metaphor 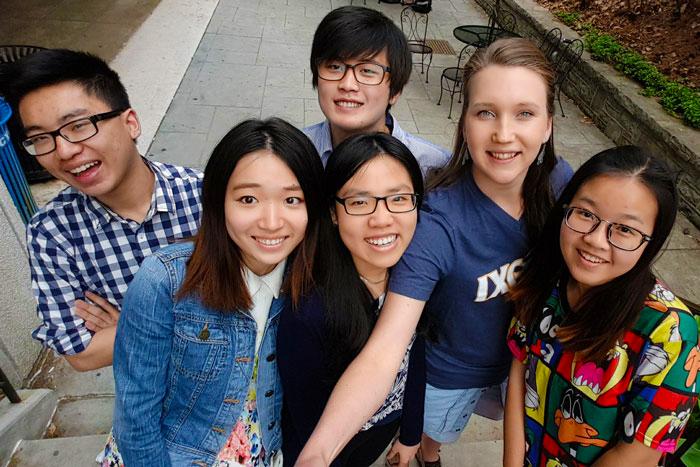 The founding members of WIND, from left (all class of 2018): Nam Nguyen, Christy Chen, Jun Lee, Hang Ngo, Anastasiya Khlopina and May Wu. Photo by WIND.

WIND brings a new kind of cultural exchange to campus

Imagine you’re a new student at Orientation and you meet a fellow first-year student who has adopted this as his go-to greeting: "I'm Chinese, I wear glasses, but I'm not good at math." It’s funny (and real), but it says a lot about preconceptions and stereotypes. And it’s one of the aspects of being an international student that a new campus organization hopes to address.

We Introduce Nations at Dickinson (WIND) was founded last fall by a group of international first-year students, and its founders point out that the name itself encapsulates the group’s mission.

“We started as the Cultural Exchange Club, but we wanted it to be more than a club,” says Anastasiya Khlopina '18 (international business & management), a member of the Dickinson Christian Fellowship, volleyball team and future RA who hails from St. Petersburg, Russia. “And WIND is a nice metaphor: Wind blows all across the globe, bringing cultures together, mixing them together.”

Yanxiu “Christie” Chen '18, from Dongguan, China, serves on the President’s Commission on Diversity and will be an Orientation assistant in the fall. She sees WIND as a great opportunity to gather international and domestic students under one big umbrella.

“We want to help people get out of their comfort zones,” says Chen of the approach her friend with the glasses and less-than-stellar math skills clearly embraces. “Then people can really talk to different people and find out about each other’s cultures.”

Overturning stereotypes through cultural exchange is one of WIND’s goals, and it’s a goal members hope to achieve through various events, such as Country of the Week, a cultural showcase that got off the ground in the spring in conjunction with the Japanese Aesthetic Club.

“There are a lot of organizations and clubs for international students to join and participate in,” says Lee, who is in Dickinson’s chapter of Alpha Phi Omega, the national service fraternity, and serves as a multicultural ambassador in the admissions office. “But we want to link all the Dickinson community, making a large core and providing even more opportunities for students.”