Where Curiosity Took Her 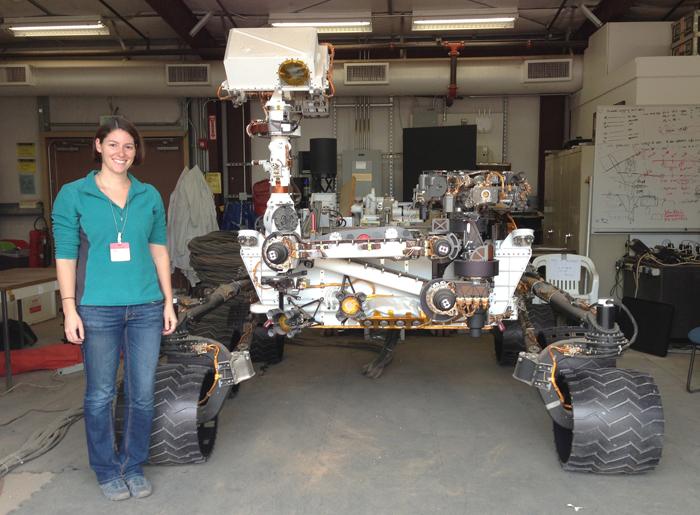 Millions around the world tuned in to the live broadcast on Aug. 6, 2012, as the Mars Science Laboratory spacecraft completed its 350-million-mile journey to the red planet and prepared to make one of the most expensive and complicated landings ever attempted. The final moments were especially nail-biting, as the craft slowed its descent by parachute and used retrorockets and a sky crane to touch down, wheels first, on a target area only about 12 miles long—one-fifth of the size attempted during earlier trips.

“I cried as I watched it—and not because I wouldn’t have a job if anything went wrong with the landing,” recalled Kristen Miller ’06, who recently visited Dickinson to share her experiences performing tests based on data from that very mission. “It just all went so perfectly—it was a beautiful feat of engineering.”

A double major in archaeology and geology who went on to earn a Ph.D. in geochemistry at the University of Maryland, Miller was a postdoctoral assistant for the Massachusetts Institute of Technology. Working in collaboration with NASA’s Mars Science Laboratory mission, she would spend the next 18 months performing geochemical tests that would help characterize Mars' climate and geology.

Getting its marching orders

Working on mineral/organic interactions, Miller provided scientific support for the Mars Science Laboratory Sample Analysis at Mars (SAM) instrument team; the results were published in the journal Science and the Journal of Geophysical Research: Planets. Her team’s ongoing goal is to determine whether Martian conditions have been favorable to support life.

Just like the scientists on Earth who support the mission, the Curiosity rover powers down each night and begins work anew in the morning, responding to direct-upload commands from Miller’s team that outline tasks for the day. (The direct uploads are remarkably quick, arriving on Mars in about 10 minutes from submission; indirect communications from Curiosity to Earth, sent by radio relays via Mars orbiters, can take hours or days.)

Inching across the Martian landscape at a painstaking pace, Curiosity does much more than use telescopic, stereo-and-color cameras and atmospheric and environmental sensors to capture pictures, video and atmospheric readings. The rover also uses receptors and drill-and-scoop mechanisms to gather atmospheric and geological samples and then processes the samples on site, using her state-of-the-art analytical instruments.

“It’s really spectacular,” Miller said of the instrument payload aboard Curiosity, which includes a drill and scoop for solid sample analyses, six gas chromatographs, a mass spectrometer, an X-ray diffraction instrument, radiation assessment detector and—everyone’s favorite instrument, according to Miller—a laser that can target small pebbles and pulverize rock to powder. And every day, Curiosity transmits reports via satellite back to Earth, where scientists interpret the data by comparing it with Mars analogues. That’s when Miller’s work begins.

Curiosity’s first pictures, taken on touchdown, displayed an area where water once ran beneath Mars’ dusty surface—an encouraging start. Subsequent readings, photos, video and samples likewise supported the team’s hypothesis that Mars once had an environment that was similar to Earth’s.

Visual and geological data mined from areas of Mars known as Yellowknife Bay and Mount Sharp, for example, displayed traces of long-ago running and standing water that’s now etched into the planet’s surface and hidden in calcium-sulfate-veins within Martian rocks. And tests revealed that the water that flowed on Mars was neither too acidic nor too salty to support microbial life.

The team noted a spike in methane over a 60-day period, another possible indicator of life, and went on to report evidence of other elements necessary to create a habitable atmosphere. They also were pleased to announce the first-ever detection of a Martian organic chemical, the focus of Miller’s work.

As Curiosity carries on her glacial-speed journey, scientists in NASA’s long-term Mars Exploration Program continue their work, in hopes that we might one day safely explore Mars in person. Miller, however, completed her postdoctoral research at the Department of Earth, Atmospheric and Planetary Science, Massachusetts Institute of Technology, last month. She plans to continue working on geochemistry programs, but, for now, she’s enjoying some down time with her husband, Andrew, and their five-month-old daughter, Penelope.

Miller’s lecture, which was sponsored by the Clarke Forum for Contemporary Issues, was attended by community members, students and faculty members, including Marcus Key, Joseph Priestley Professor of Natural Philosophy, with whom she’d worked closely as a student-researcher, and Professor Emeritus William Vernon, the founder of Dickinson’s geology department (now earth sciences) and namesake of the William Vernon Prize for Excellence in Geology, which Miller was awarded while at Dickinson.

“I’m thankful and honored to have been asked to come back to Dickinson to speak with you today,” Miller told the audience. “The principles I learned here provided me with the foundation to do this work.”