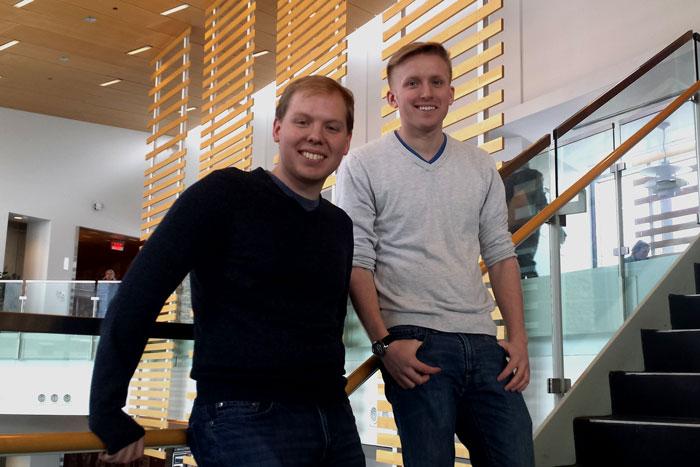 James Doyle '10 (left) and Seth Tracy '12 came back to campus with some added advice for computer science majors: "Do programming contests. They're a great tool to expose you to new problems and new ways of thinking about problems you haven't seen before." Photo by Tony Moore.

James Doyle ’10 and Seth Tracy ’12 came to campus recently for a lunchtime computer-science talk titled “An Epic Approach to Digitizing Healthcare.” The software company they work for is called Epic, and the tasks Doyle and Tracy tackle on the job just might live up to the name.

Think about traditional patient medical records: the chart hanging off the end of a hospital bed in an old movie, those racks and racks of off-white folders jammed into sliding storage shelves behind the counter in a doctor’s office, lab results being faxed from office to office. Founded by Judy Faulkner ’65, Epic aims to digitize all of this information so that each patient has his or her own electronic medical record that goes everywhere it needs to, automatically.

Both of the former computer-science majors are software developers, and a big part of their daily to-do lists involves figuring out how to make Epic’s software talk to hundreds of disparate systems and exchange data in a meaningful way—across the country and across the world.

“Dickinson makes you a really good programmer,” said Tracy. “You not only have the applicable skill to develop a computer program, but you have the theory and the underpinnings that you're probably not going to get anywhere else.”

Doyle was equally effusive about how directly his path led from Dickinson to Verona, Wis., and he was quick to note that everything he learned about computer science as an undergrad formed the spine of a fully fleshed-out education.

“It's one thing to figure something out in your head,” he said, “but you have to be able to communicate it to others so they can help you execute it. The liberal-arts environment gives you the background to be able to do that.”

Tracy put it in a context that will probably be clear to anyone who has ever felt overwhelmed by esoteric minutiae as they fly from one specialized department to another.

“If you can communicate to your boss what you're technically trying to do in three sentences or less without using words like HL7 and CCD or C-CDA, they're going to appreciate it,” he said, noting that other Dickinsonians interested in a career in health-care software can learn more about opportunities at Epic through the company's career page. “The liberal-arts setting gives you the written and verbal skills that become very important.”