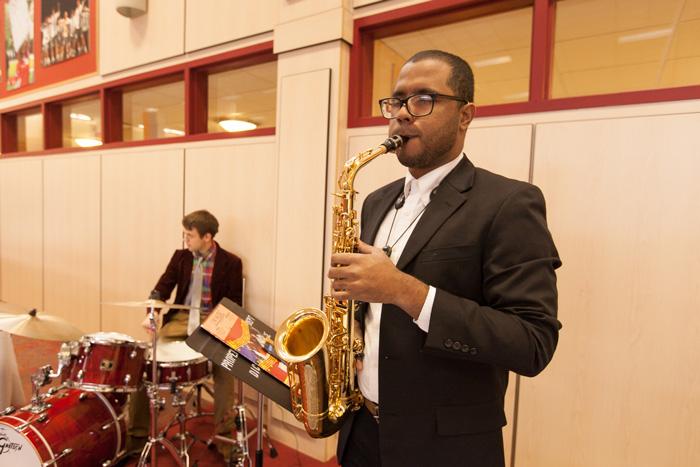 The Ed Padilla Jazz Quartet, led by Edwin Padilla '16, is one of many student groups performing for First Friday. Photo by Carl Socolow '77.

Growing up in New York, Edwin Padilla ’16 nurtured big-city dreams. Today, this Posse scholar is on track to realize them. He discusses his love of music, the sense of accomplishment that arises from beating the odds and what he learned from John Coltrane and Kanye West.

The Alchemist by Paulo Coelho.

On choosing my double-major:

I planned to be a computer-science major since I was 12, and originally, I considered music [as simply] an interest, maybe a minor. After I got to campus, I got involved in the Jazz Ensemble and DICE, and I participated in jam sessions. [After talking] with a few of the music faculty, I saw how deeply invested they were in my education, and I re-evaluated the role of music in my life and decided to double-major. It is challenging to manage two very different majors, but I think it helps me take full advantage of a Dickinson liberal-arts education.

I have had two internships on campus. First, I created the initial Web site for the Dickinson College Farm, along with of [Associate] Professor [of Computer Science Timothy] Wahls and my colleague Asir Saeed ’16, laying the foundation for the current site. My most recent internship at Dickinson College included game programming. It captivated me, because it was a field I had no [previous] experience in, and it was different from anything I’ve done before. Through these experiences I learned the importance of patience, project design and product testing. I learned how to communicate with clients, how to plan projects, efficiently distribute workload and execute. In addition, I learned a multitude of programming languages including PHP, MySQL, JavaScript, HTML and CSS.

Being a first-generation college student and proving to my family that success and greatness can arise from poverty.

John Coltrane and Kanye West. Through them I have learned to chase my musical passions and to disregard the naysayers. I have learned to appreciate what is around me, and that the best way to be successful is to dedicate yourself to your craft.

I plan to work for a technology firm and, possibly, attend graduate school for music (emphasis on jazz studies). I most likely will also go back to New York, as expensive as it is, because that is where my family is, where I was raised, and—did I mention?—it is the best city in the world. Eventually, after giving some stability to my family, I would like to become a full-time musician. While these are high ambitions, with the right amount of planning and determination, I believe that these dreams are possible.

Surprisingly, I can draw if I spend enough time on it (sort of).

A campus like this [offers] a once-in-a-lifetime experience. We have a variety of resources in the palms of our hands. I say, enjoy all the little things life has to offer, and you will be a happier and more grateful, generous and peaceful person.