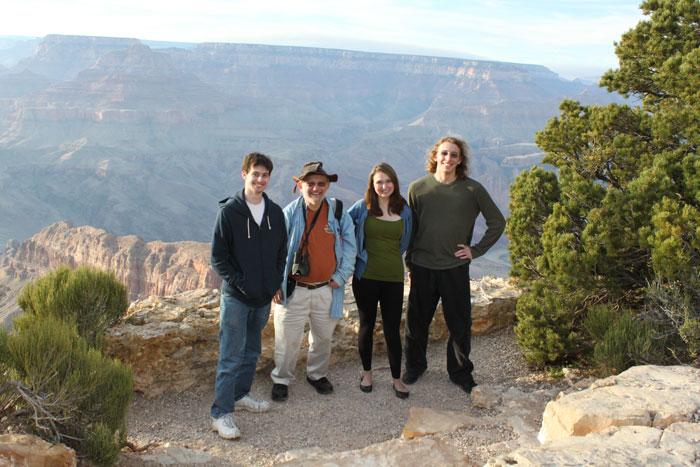 The group ventures out into the region to visit the Grand Canyon. From left: Ben Koltz ’15, Associate Professor of Physics & Astronomy Robert Boyle, Marie Holden ’15 and Zephram Wolf ’16. Photo courtesy of Robert Boyle.

Out in Flagstaff, Ariz., the Lowell Observatory has hosted astronomy researchers since 1894, and the resulting research has led to some pretty notable breakthroughs: Think the discovery of Pluto and the first evidence that the universe is expanding, to name just a couple.

In what might come as another discovery to many, in the mid-1980s, Dickinson became a founding member of a consortium called the National Undergraduate Research Observatory (NURO), a group hosted by Northern Arizona University and Lowell that’s given access to Lowell’s 31-inch telescope.

“It’s been a valuable part of our astronomy curriculum,” says Robert Boyle, associate professor of physics & astronomy, who recently made his biennial trip with three students—Marie Holden ’15, Ben Koltz ’15 and Zephram Wolf ’16, all physics majors. “It has allowed us to provide a background in observational astronomy to Dickinson students that, in my opinion, is the equivalent to that provided by programs at large research universities.”

While Dickinson has the Michael L. Britton Memorial Observatory, featuring a 24-inch telescope atop Tome Hall, a telescope aimed through the desert sky offers an entirely new vista.

“Arizona is fantastic for observational astronomy because of its clear skies and minimal light pollution,” says Holden, whose senior astronomy research project involves plotting asteroid 756 Lilliana’s light curve, which measures changes in its brightness over time. “This trip allowed me to get a better sense of what it's like to do research in astronomy and also allowed me to use a telescope from one of the most respected observatories in the country.”

The Lowell 31-inch telescope was built in the early years of the Apollo space program to map the moon for the U.S. Geologic Survey, and it’s since been refurbished and dedicated to student research. Koltz wanted to study the Lowell telescope to help with his senior project, which sets out to improve the control system of Dickinson’s Britton telescope, and Wolf wanted to use the expedition to build a foundation for next year.

“My senior project mostly has to do with how data is taken and analyzed with the Britton Observatory telescope on campus,” Wolf says, “so working with the Lowell Observatory’s setup was informative for how that might be approached.”

Taking full advantage of the 2,000-mile research expedition, Boyle and his students also explored the natural splendor of the region, often visiting such sites as as the Grand Canyon, Petrified Forest National Park, the Walnut Canyon cliff dwellings and Meteor Crater. This year, the group’s trip to the Grand Canyon came with a bonus: a partial eclipse.

It’s natural wonders like these that keep students coming back each year, and for Holden, her chosen field of study is just as mesmerizing.

“To me, the study of astronomy feels limitless,” she says. “I will never get bored with astronomy, because there is always something new to observe, and there is so much we don’t understand about our universe.”