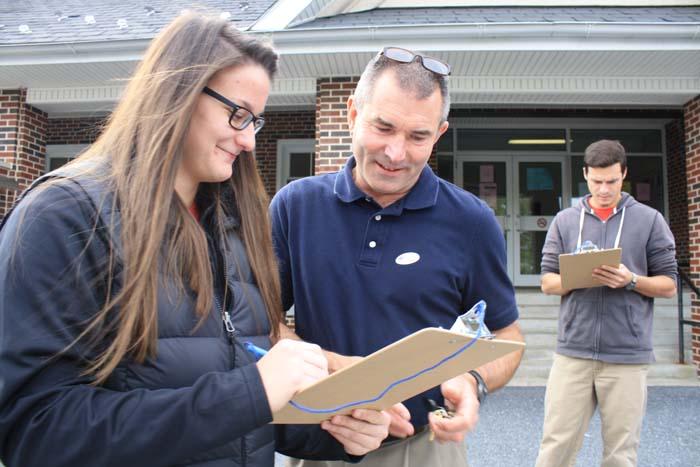 At 8 a.m. on Tuesday, Nov. 4, just one hour after the first votes were cast in the 2014 midterm election, law & policy majors Makenzie Miller ’17 and Ralph Humiston ’17 arrived at the Stuart Community Center, the main office for Carlisle’s parks and recreation department and a busy voting precinct within walking distance of campus. Toting clipboards, paper surveys, collection envelopes and Dickinson name badges, the students stood 10 feet from the polling entrance—per election laws and protocol—and dug into their assignment. As voters emerged from the polls, every conversation began with, “Hi, I’m a student at Dickinson College. We’re conducting an exit poll of Cumberland County voters, and I was wondering if you’d be interested in participating?”

Getting a feeling (thermometer)

Miller and Humiston are two of 35 students in professor Sarah Niebler’s research methods and senior seminar courses, who were dispatched as Election Day exit pollsters at nine voting precincts throughout Cumberland County, Pennsylvania.

Exit polling in 2014 is a pilot project for Niebler, an assistant professor of political science, and the first in a series she plans to conduct with students during upcoming elections. Her goal is twofold: Provide students with a rich, hands-on polling and data-collection experience and build a robust database of voter behavior and voting trends in Cumberland County.

“For this midterm election, our goal is to understand relationships between demographic characteristics, policy positions and vote choice in the Pennsylvania governor’s race and U.S. House race,” said Niebler.

Voters were asked to share their choice for Pennsylvania governor, offer a presidential approval rating and state their views on controversial and oftentimes partisan issues such as hydraulic fracturing (fracking), the minimum wage, and legalization of medicinal marijuana. Included in the poll was a “feeling thermometer” to gauge "hot" or "cold" opinions on three political groups: Democrats, Republicans and Independents.

“Feeling-thermometer questions allow us to move beyond a simple ‘like/dislike’ assessment of political parties," said Niebler. "We’re able to get a more nuanced look of how voters view participating in politics."

Students were nervous about approaching random voters but eager to apply what they learned. “I’m happy to take part in this poll and gain insight as to how pollsters and campaign workers monitor results throughout an Election Day,” said Austin Davis '15, who is no stranger to elections. The political-science major worked with two local political candidates, Dawn Flower and Barbara Cross in fall 2011. Davis also ran his own successful bid for elected office as president of Student Senate.

During the last class before Election Day, Niebler shared several tips with her research methods students. “Test your assertiveness skills,” she said. “Polling is within your purview as members of a research team.”

Back at the Stuart Community Center, Miller and Humiston collected 30 exit polls by the end of their two-hour shift. “I was surprised that so many people were willing to participate because most of them were in a rush to get to work,” said Miller. “It was a little weird at first to go up to people and ask them if they wanted to participate because you didn’t know how they’d respond.”

Asked why he stopped to complete the survey, one voter said, “I never participated in one and it helps them get information and track what’s going on.” Another voter, Matt Reichard, added, “They were nice when they asked me.”

State Rep. Stephen Bloom, the incumbent for Pennsylvania’s 199th District, was at the polling location distributing campaign materials and thanking voters who turned out. He watched the student pollsters at work, impressed by their professionalism, the participation rate of voters and the project as a whole.

In total, more than 400 surveys were completed and collected. The next steps are to get the data input into a workable format and assess the sample quality. “We’ll look at how well the precincts we polled represent the county as a whole and how well the people we talked to represent the precinct as a whole. Knowing these things will allow us to evaluate the methodology of the poll going forward,” said Niebler, who hopes to make the topline results accessible to the public.

“I'm very proud of the effort all the students put forth, and I hope we undertake another round of polling in two years,” said Niebler.