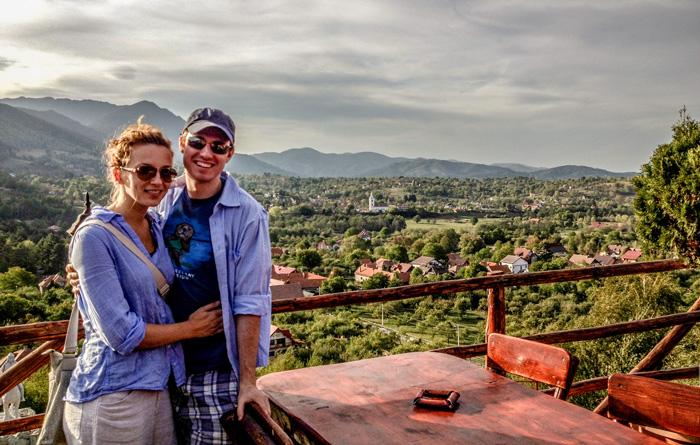 Eli Brill '10 and his wife in Transylvania. Photo courtesy of Eli Brill.

Eli Brill '10 follows his family to Transylvania, where he's found success and a lot more

Eli Brill ’10 spent his first postgrad year as an aide to two elected state officials, a move facilitated with the help of Joshua Swarz ’08. Now, living in Transylvania, Romania, the former international business & management major has founded an import-export business, manages a heavy-industry factory space and is working on creating the first truly western, “American style” luxury residential planned-development community in Transylvania. He does all this while being able to work with his family, who started a chain of restaurants (Marty Restaurants) in the region 20 years ago, as well as his wife, Tia, whom he met in Romania.

Can you speak to how Dickinson’s “useful education” might apply to what you’re up to now?

The one big difference between the academic “business education” I received and the “real world” business environment in Eastern Europe is the lack of organization and order in the “real world.” We like to teach under the best-case-scenario mentality, but in reality you can find yourself never seeing one true “best case” as described in textbooks. This was challenging at first, but it brought me to another conclusion about the value of the Dickinson education. Sure, a best case may not be present in the “real world,” but I noticed I was often the only one who had any perspective of that. My education allowed me to see that a better way was possible, and I was then able to seek improvement toward making it a reality.

I was an elected student senator every year I was on campus, and I had the privilege to sit on the Academic Programs and Standards Committee with professors and deans. I learned and grew a lot through witnessing both how the students could come together to effect positive change, and how much the administration truly cared about providing the best possible learning environment for us. I think that had a great impact on my perspective—that improvement is possible and should be fought for.

I put together an annual letter about my story and the role Dickinson has played in it. Admissions sends this letter out to prospective students applying to Dickinson in the field of business. I am happy to do my part in encouraging the next generation of students. It benefits them and us to see the right students coming to Dickinson.

I think there are many positives to working overseas in an up-and-coming economy. Things are cheaper, meaning your investment/potential loss is often far less. My father often says that Transylvania feels like the “wild wild West” (I like to say the “wild wild East”). There is opportunity around every corner, and with it a lack of organization and established experts, meaning you can make more mistakes without being eaten by your competition.

What is the most challenging part of what you’re doing now?

Eastern Europe struggles with another typical “wild West” problem: a lack of effective and enforced regulation, which leaves a wide door open to corruption. As a business owner operating in such an environment, I get to choose how I want to run my business. Do you exploit the lack of regulation, potentially damaging people, the environment and the development of the country, or do you personally choose to stand for what you know is right, even if the authorities may never know? We run our business on a basis of Christian values—or put another way, the Golden Rule: “Do to others as you would have them do to you.” We do our best to honor what is right, versus what might get us the most right now at the expense of others.

You appeared on House Hunters International. What was that like?

It was great fun! We were watching it one night when my wife said to me, “Why can’t we be on that show? We have an interesting story, don't we?” So I went online and found an e-mail address, sent them a short e-mail, and within a couple of weeks we were contacted by the producer. Three months later an international film crew flew out just to film us and our life out here. My wife is a very talented interior designer, and it was a blast to show off the work she put into our place. The episode was entitled “Wherever I May Romania,” and it just aired on HGTV.

Spend time with my wife. We like to say we spend 25 hours a day together and we love it. Saturday night also is a time when I try to begin praying about our church meeting the next morning. I was always a Christian, but there is something very powerful about leaving your home and all that makes you comfortable, leading you to see things for how they really are.

I would want to have dinner with Jesus. Not just to chat but to really get to enjoy this mind-blowing experience of being next to God in human form.