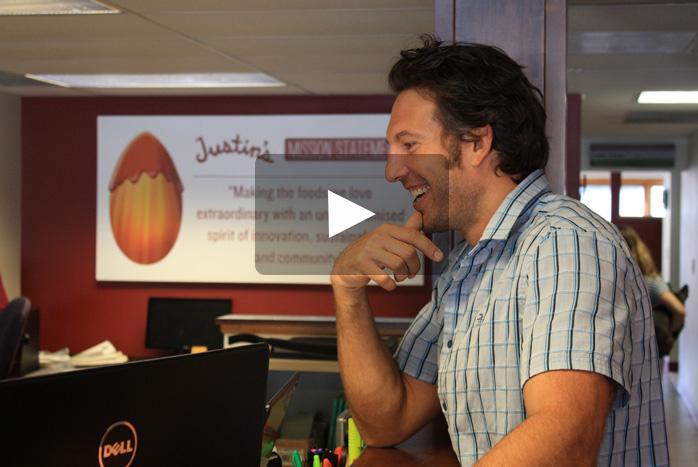 If you’ve ever had a great idea and wished you could put it into motion, take a page from Justin Gold '00’s book. In 2002, Gold found himself in a Colorado supermarket, struck by the fact that he was looking at dozens of flavors of salsa and nearly 100 varieties of jelly—but only two kinds of peanut butter. He soon began experimenting in his own kitchen with nuts and a food processor.

“I was really frustrated because your only choices were crunchy or smooth,” Gold says. “So I started making my own peanut butter, adding honey, chocolate chips or coconut flakes.”

It wasn’t long before Gold began selling his homemade nut butters at the Boulder Farmers’ Market, and soon people were buying his products faster than he could make them. So in 2004, Gold wrote his first business plan and launched his eponymous brand of organic nut butters. Now Gold is the CEO of one of the country’s fastest growing natural product companies, and his nut butters include such varieties as maple almond, honey peanut and chocolate hazelnut. His products are now available to millions of hungry, health-conscious customers, as they can be found from coast to coast at such retailers as Whole Foods Market, Safeway, Fresh Market, Target, REI and Sprouts (as well as Starbucks locations across the U.S. and Canada).

Justin’s has received numerous accolades, including Clean Eating magazine’s 2014 Clean Choice Award (for its Maple Almond Butter 80-Calorie Squeeze Packs), Prevention magazine’s 2014 Cleanest Packaged Food Award (for its Classic Peanut Butter) and Vegetarian Times magazine’s 2013 Foodie Awards (for Best Nut Butter). The company has been ranked in the top 15 on Inc.'s 5,000 Fastest Growing Companies list in the Food and Beverage category two years in a row, and Gold was recognized in 2013 as Ernst & Young’s Entrepreneur of the Year in the Mountain Desert region. The company also enjoys endorsements from a variety of professional athletes, from a surfer and snowboarder to an MMA fighter and cyclist.

Going hand in hand with the company’s organic approach to making its nut butters, Justin’s insists on being a sustainable enterprise—no great surprise maybe, since Gold himself was an environmental-studies major at Dickinson. This approach includes the company’s offices using solar power, and all ingredients are sourced as locally and sustainably as possible. In addition, all cartons, boxes and product caddies are made with wind power, and Justin’s uses no genetically modified organisms (GMOs) in its butters or BPA in its jars.

An avid backpacker, runner, mountain biker and skier, Gold sees the organic/sustainable path as the only way forward. “How else are we going to get the industry to change,” he asks, “unless we go out there and stir things up?”