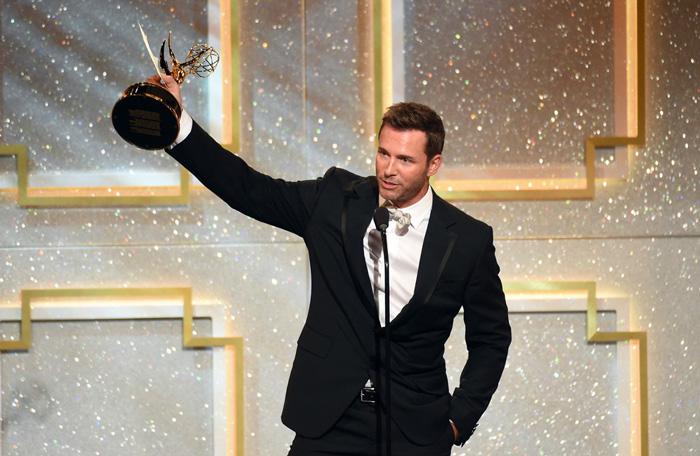 With family and career just where he wants them, Eric Martsolf ’93 is 'one grateful man'

In a moment of triumph few people will ever feel, Eric Martsolf ’93 recently hoisted the Daytime Emmy statuette for Outstanding Supporting Actor in a Drama Series and gave thanks to his coworkers and family. He plays Brady Black (one of the great soap opera names) on Days of Our Lives, and if you’ve seen any episode since 2008, you’ve likely seen one of his more than 900 appearances. You might have also caught him on Passions, on which he appeared in more than 750 episodes, or on episodes of Smallville, NCIS, Rizzoli & Isles or Extant, the Halle Berry series on which he lends his voice to the computer program known as Ben.

Martsolf will be back in the Central Pennsylvania area during Labor Day weekend at a fan event, but we caught up with him beforehand.

The amusing answer to this question is the fact that I was practically given a screen test for my first role on television as Ethan Winthrop on NBC’s Passions as a result of my pronouncing the word “precedent” correctly. The character was an attorney, and my political-science background certainly supplied me with the vocabulary necessary to pull it off! On the other hand, the freedom of learning that permeated Dickinson would turn out to be a crucial tool for me as an actor. In my profession, it’s all about freedom and exploration—things Dickinson stressed religiously.

Choir. Truman Bullard was such a hero of mine.

The concert in which we performed Beethoven’s Ninth with the Harrisburg Symphony Orchestra. It was magical for every student involved.

The entertainment industry has deep-rooted tendencies of forgetting where you came from and a general lack of remembering your roots. One can get swept up with the glitz of Hollywood as it shoots one’s career skyward. I keep my degree proudly mounted in my dressing room at Days of Our Lives as a reminder of my days gone by.

How did you get interested in acting, and what inspires you in your career?

I began acting in high school simply as a way to achieve friendships—predominantly female “friendships.” Ha! But I would soon come to realize through each theatrical endeavor that it was a passion that I had no choice but to follow. My inspirations stem from every side of my business—not only actors, but specific scene work from screen or TV, plays and musicals.

Acting seems like an inherently interesting way to make a living, but what about it interests you most?

Acting, as a living, is not for everyone. It’s downright nerve-racking at times. Its failure rate is higher than most professions. I do, however, have a gambler’s mentality by nature. I’ve never been afraid to take risks, and an actor has to take them habitually.

The instability of it. There is no certain pathway to the zenith of an acting career—it has a constant ebb and flow.

What was it like when they called your name as a winner at the Daytime Emmys?

It was simply the greatest moment of my career. What is a guy from Harrisburg, Pa., doing up on this stage in Tinseltown accepting one of the most prestigious acting awards? It’s still unimaginable to me at times. But I am one grateful man today.

I prefer a Saturday filled with hanging with my twin boys, having a nice bottle of red with my wife and reflecting on my world and where it’s going.

If you could land a role opposite any actor, who would it be, and why?

It sounds stereotypical, but I would say Al Pacino. I’ve admired his body of work for decades.

I would listen to Miles Davis’ Kind of Blue, read Treasure Island and watch the Godfather trilogy.

I would stretch the soap opera business to other states in our union, particularly those in which my family members reside. Other than that small detail, this guy doesn’t have much to complain about.