In August 2015, the Office of Institutional Initiatives & Diversity presented an orientation for all departments with tenure track hires. The orientation included a review of the online application process, how to leverage the process to help identify diverse candidates, strategies for working with search committees and practices for avoiding unconscious bias in the interviewing and hiring processes. 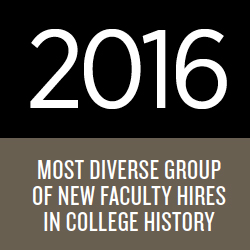 Meetings with department chairs and search committee members have continued and have shifted toward developing specific strategies for generating more diverse candidate pools, such as recruiting at major conferences, more proactive advertising language and directly targeting research universities that have a history of producing women and people of color Ph.D.s. Also, in conjunction with Liberal Arts Diversity Officers (LADO), we visited five University of California schools, the University of Michigan, University of Chicago and Howard University to strengthen the pipeline between these research universities and liberal-arts colleges. As a result of these efforts, in part, the new faculty members hired in 2016 were the most diverse in the college’s history.

Under the auspices of the All-College Committee on Enrollment and Student Life, and with the help of the director of institutional research, we conducted a student engagement survey last fall that resulted in an impressive 52 percent participation rate. An initial review of the data focused on race/ethnicity, gender and international students. Broad initial results, augmented by individual interviews, were shared with the Dickinson community, and cross-divisional strategies are being developed to ensure all students are supported and engaged in the best possible ways. 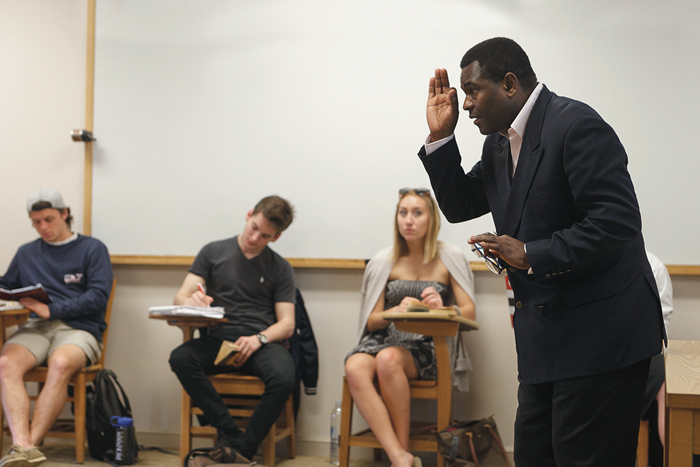 Student attendance at a November 2015 Mellon Foundation summit to address issues of underrepresentation in research university graduate programs as well as faculty underrepresentation in liberal-arts colleges contributed to the development of activism on campus. Some of the experiences acquired at the summit informed the strategy for the Why We Wear Black movement (now the Student Liberation Movement). Consequently, the student protests at Dickinson were strategic, thoughtful and productive in contrast to some of the activities occurring at dozens of other institutions nationwide.

Students created a document of “asks” seeking greater diversity among faculty and Wellness Center counselors, increased training collegewide to avoid bias and a greater voice for marginalized students. We have engaged in proactive discussions to address issues of equity and exclusion and have made progress, though more remains to be done. The President’s Commission on Diversity has been charged with coordinating the effort to implement diversity and inclusivity training.