The Multifarious Worlds of English 404 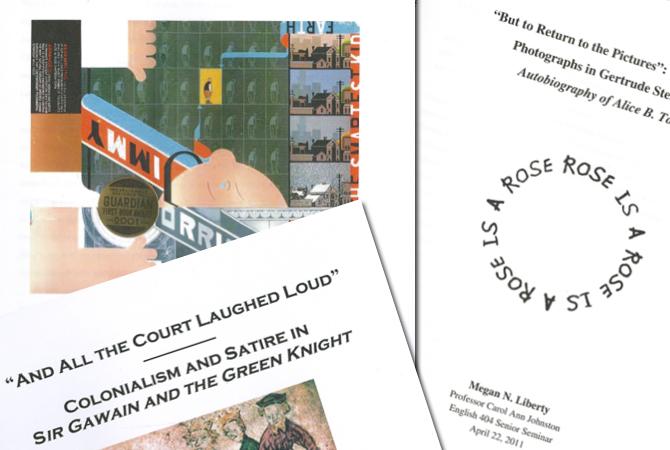 Seniors take to the roundtable to work on wide-ranging theses

A phalanx of open laptops lines the table, and the room swirls with chatter: a dream someone had about attending Comicon, missing an ALLARM meeting, monitoring online April Fools' jokes.

"How's everyone doing?" asks Carol Ann Johnston, the Martha Porter Sellers Chair of Rhetoric and the English Language, who sits at one end of the egg-shaped table. This is her class, representing a third of the English 404 students. The other two thirds are divided between professors David Ball and Thomas Reed.

There are 17 days left until Dickinson's English 404 senior seminar comes to an end, until the 50-page papers at the heart of the class are due. But despite the looming deadline, the mood is relaxed and everyone seems to be doing just fine.

Today three papers are being discussed by the group: Up first is Mary Nolte's "Hopelessly Fragmented: A Psychoanalytical Analysis of Aleksandar Hemon's The Lazarus Project," and she's not allowed to respond until the session is over.

The commentary comes in a cascade, the group clearly past the point of feeling awkward about laying out critiques of their classmates' papers. Nolte is quiet and calm as her classmates parse her work—her theories, her analysis and her own parsing—and she keeps busy taking notes with pen and paper behind her open laptop. The students finish each other's sentences over and over, as if they've formed some kind of hive mind, which has been growing since the previous semester, no doubt, when they were all in the English 403 seminar together.

"You can feel an energy in these rooms," says Ball of the roundtable sessions. "Very few English departments have a mandatory thesis, or a mandatory thesis of this length. Princeton is one that does. I did my graduate work there, and they don't have the same experience as these students. There isn't the sense of a community. We've structured the entire program around this experience."

Nolte later reveals that during the session it's not uncommon for some part of her brain to plot against her calm outer demeanor. "Every now and then, I have the urge to jump in and say, 'No, but I really meant this …' or 'It makes sense in my head, I swear!' But this tendency to defend our work is exactly the reason we aren't allowed to speak when our projects are being workshopped."

When the class has run out of time or theories, Johnston leans back. "OK, Mary," she says. "What are your thoughts?" The subconscious plot foiled by the sound and constructive words coming from Johnston and Nolte's classmates, Nolte fleshes out her points, her retorts, her thanks, noting how it's been a helpful process the whole way through. "I like to think of our projects—as least in the beginning stages—as kind of a puzzle," she later says. "Each of us lays out the pieces and then we work in class to fit them together to show the full picture."

Johnston concludes with some advice for Nolte but for the entire group as well. It involves focus, which is huge in a 50-page paper, huge in life.

"Lay out the [novel's] character, tell us what you're taking from him and then you can leave him behind if you need to," she says. "You don't want to let the theory overcome what you're talking about. The theory is a can opener. It's the thing that opens the can of your interests. But don't let the can opener become what's in the can."

In the East Asian Studies Room, where Ball's class meets, the mood is also lighter than might be expected.

Unofficially, the group is discussing Jessica Cooper's paper ("Holding Out for a Heroine: Brave's Failure as a Feminist Film"), which she casually describes as "looking at Brave through feminist film theory and talking about the male gaze and how verbal and visual coding in the film are negotiated." In the cacophony of comments that rush in, someone mentions that Cooper had a thesis-themed birthday ("That's dedication!" Ball says) at which friends got her a basket full of Disney Princess stuff, prompting the suggestion that she turn in her thesis wearing a tiara.

The real discussion soon gets under way (on Emily David's "FLOTUS: Fixed Language of the Unspoken Stateswomen: A Study of the Restricted Rhetoric of a First Lady"), and Ball steers the conversation deftly from point to point, making sure to keep his students' ideas moving around the room. He's pretty hands-off, and the way he describes 404 makes it clear that he and the program itself foster independence.

"The syllabus is essentially the timetable, nothing more," he says. "The students are responsible for pursuing the consequences of their own ideas."

These ideas are transformed during the revision process, and students discover that these sessions not only enhance but truly form the shape of their papers. Audrey Scott, whose "Jane Austen With Her Boots On: Making Meaning Through Minor Characters in Kipling's 'The Janeites' " soon will be under the microscope, finds depth in the exercise.

"The revision process is painstaking but so powerful too," she says. "It's tough, because there's a balance—you can't accept all of the criticisms, but then some of it will make you say, 'Oh yes!' "

As everyone from John of the Cross to Blake Snyder to Joseph Campbell can tell you, those dark nights are what give the journey its ultimate meaning, providing the introspection needed to reach the end of the road intact and triumphant.

And so waiting on the other side of that darkness is a phenomenon that Reed calls being "surprised by authority," meaning that the students become experts on the works they are exploring. "This is the point at which they realize they know more about their topic than anyone else in the class, including the professor," he says. "It's quite a developmental moment, and it happens pretty often."

Professors Johnston and Ball explain English 404: its origins, its landscape and the intellectual journey taken by students:

Seniors flesh out the 404 experience: what it's like being this immersed, how the process progresses and what students take away from the experience.