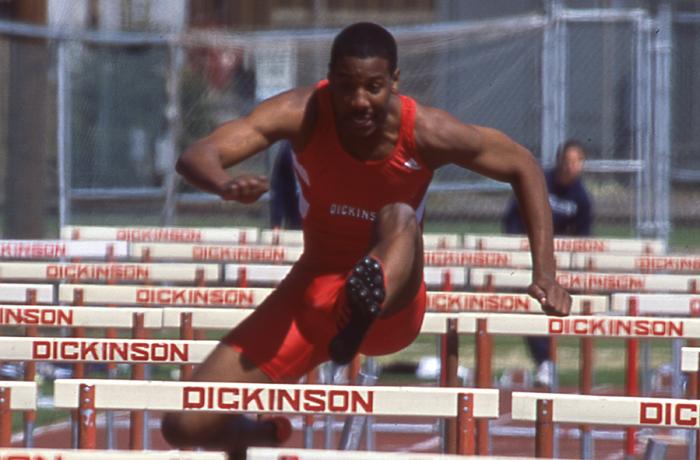 Meet men’s track & field star Chavaun Johnson ‘03, who was inducted this fall into the Dickinson College Sports Hall of Fame.

2003 McAndrews Award winner and Hall of Famer Chavaun Johnson ’03 entered Dickinson as a football recruit, but by the end of his first semester, he was an All-American MVP in track & field and had several school records and gold medals to his name.

No one was more surprised by this turn of events than he.

As a high-schooler in Philadelphia, Johnson was a standout in the classroom and on the football field, and he came to Dickinson on full academic scholarship. He soon learned that his inner-city high school had not adequately prepared him for the college curriculum, however. And he couldn’t burn up much stress on the field, because first-year footballers rarely get a chance to play.

So Johnson spent long hours studying in the library. And when football season ended, he decided to give running a try. “I had only run races and relays in high school, because my school didn’t have the resources,” he says. “I figured that if I trained hard, I might be able to compete by my senior year.”

Instead, Johnson garnered gold medals at his first indoor track meet, placed second at the Centennial Conference (CC) Outdoor All-American Conference and seventh at the indoor nationals. He also was named Mid-East Region Male Athlete of the Year for both indoor and outdoor track & field and broke two outdoor relay records. Not bad for a newbie.

Interview requests came pouring in from the local media, and by the 2001 Outdoor Track & Field Championship, Johnson had already pre-qualified for nationals and helped break school records for the 4x2 and 4x4 relays. But coming around the curve—a meter or two from the finish—Johnson pulled a hamstring and lost the race, just three weeks before the nationals.

Johnson went to nationals anyway and was disappointed by the results. But he bounced back, rounding out his career with three more records and two more All-American MVPs, and at the national Track & Field Championship in 2003, he came in third place. The significance of failing to capture that final win didn’t hit home until the following year, when Johnson caught a glimpse of a familiar face on television: The runner who had narrowly beaten him was competing on the 2004 U.S. Olympic team.

It’s tempting to speculate what might have been if Johnson had trained for the Olympics, rather than securing a job in his field right after graduation. But Johnson doesn’t go there. He’s found his bliss.

“After all, I didn’t even know I’d be on the track team when I came to Dickinson, let alone do well at it—I just wanted an education. And I worked hard to get that degree,” says Johnson, who did well enough in his classes not only to graduate, but also to tutor other students along the way. “And if I had gone to the Olympics, I probably would never have met my wife.”

As it is, Johnson has risen up the ranks at Ahold, the parent company of Giant Foods, where he’s now a manager, and he’s pursuing an M.B.A. at Lebanon Valley College—a goal he wouldn’t have imagined in his pre-Dickinson life. He and wife Kate are proud parents of a baby boy, Liam, and he describes the day Liam was born as “the happiest day of my life.”

“The other day my uncle told me that I’m living the American Dream,” Johnson says. “And you know what? He’s right.”