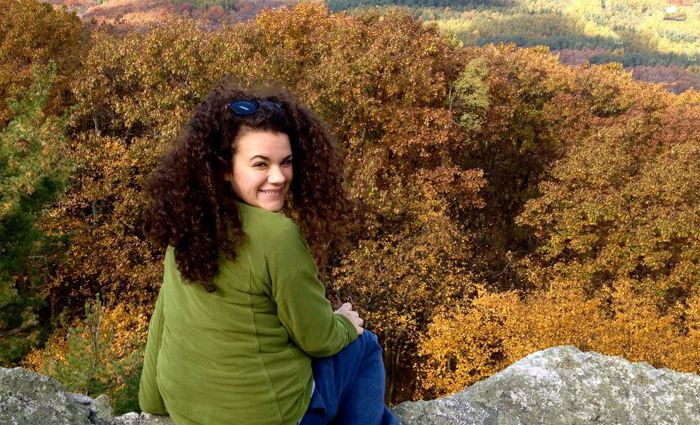 Rachael Sclafani ’16 has many interests: music, the environment and the great outdoors, reading, knitting, farming, travel and more. But, she stresses, when it comes to getting involved, it's about depth, not breadth.

I am an avid knitter, and I recently learned to crochet.

I wanted a liberal-arts school with a farm and with strong music and science programs. Dickinson fit the bill!

Harry Potter and the Sorcerer’s Stone.

Rector Science Complex. I love all of the natural light, and I find I always do my best work there.

Broccoli-cheddar bread bowl from the KOVE.

Disease in World History with Professor Hilary Smith. I found it very interesting to study disease from a historical standpoint. It made me think about disease in ways I had never considered.

During my first semester at Dickinson I took on a bit too much, and before I knew it I felt overwhelmed. I learned that I would rather pick two or three clubs/activities and put a lot of effort into them than spread myself too thin.

In my much younger years I wanted to be a mermaid, and as a I got older that changed into writer, professional soccer player (despite having stopped playing soccer after kindergarten), chef, lawyer, teacher, accountant . . . I think I hit basically every field out there.

I would love to have dinner with Daniel Quinn. I have read several of his books, and they really impacted the way I view the world.

Nothing is set in stone, but I would like to go to grad school, and at the moment I am thinking I will study something related to forest ecology. I would also like to own a small farm or at least be a large-scale gardener.