More Than a Souvenir Program 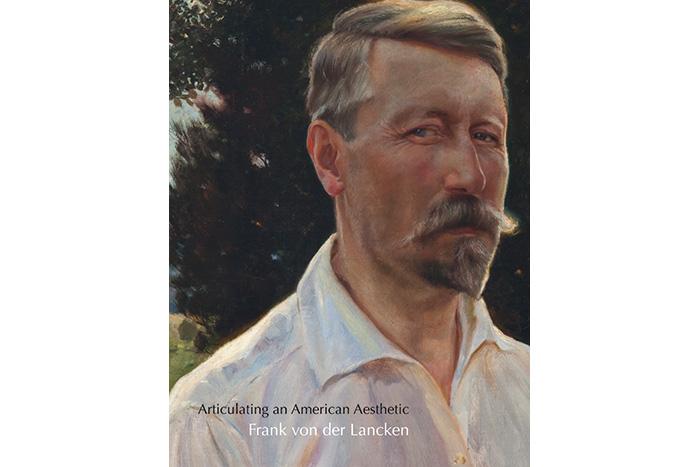 With a newborn in your arms, you’re poised at one end of the tunnel. When that wee girl co-curates a senior art show at The Trout Gallery, you have reached the other.

That realization struck me this past February with the opening of Articulating an American Aesthetic: Frank von der Lancken. The work of an obscure painter went up, with 10 youthful curators at hand to interpret (they were easily identified by their wrist corsages or, in the case of the male student in the class, a boutonniere). The college celebrated its undergraduate art historians in style, with speeches by President William Durden ’71 and Professor of Art & Art History Melinda Schlitt, who teaches ARTH 407: Art Historical Methods, the senior seminar that culminated in the exhibition.

In Schlitt’s talk and toast to her students (one of whom was my daughter Sarah ’13), she termed the evening the “capstone moment,” the chance to acknowledge the seniors’ uncounted hours of work. Indeed, from 5 to 7 p.m., the clinking of wine glasses accompanied canapés and chatter as proud parents admired the meticulously hung show, as did a mix of faculty, community members and many undergraduates (as museum director Phillip Earenfight explained, the latter are a guaranteed presence when free wine and hors d’oeuvres are on offer).

A small exchange I overheard led me to muse more deeply upon what it all meant.

An exhibition catalogue was available, and I went in search of one at the front desk. As a new supply was fetched from a nearby cardboard box, a tall, rusty-haired undergraduate appeared at my side. “Do you have any more of those souvenir programs?” he asked.

I had to suppress a smile. In the months since, however, I’ve pondered his turn of phrase. It was certainly apt enough, as the college staffer behind the counter handed us each a catalog. But the young man’s borrowing from the sports arena made me reflect on the liberal-arts education that Sarah and her peers, now graduated, received at Dickinson College.

Taken literally, “souvenir program” might be heard as a dismissal of the seriousness of the enterprise, as if the exhibition catalog were as disposable as the outdated roster of last year’s not-so-successful Red Devils football team (record: four wins, five losses).

I would argue: Not so. As a historian who makes his living writing about architecture and art, I immediately recognized not only the sophistication of the show’s installation but that the catalog itself represented one of those bridge moments when the amateur achieves the status of the professional. Henceforth that von der Lancken catalog has a place in the academic literature. The students’ well-researched text, together with the color plates, make it an essential reference for future scholars looking to delve still deeper into von der Lancken’s life and works.

A dividend will likely accrue to the artist’s reputation. Possessed of little ambition for fame, von der Lancken (1872-1950) spent less time making art than teaching (at Pratt, Chautauqua, the University of Rochester and elsewhere). Individual paintings of his were exhibited at the National Academy of Design, and two are in the permanent collection at the Smithsonian American Art Museum, but he lived to see his work on display in a one-man show just once, in Tulsa, Okla., his home late in life. Yet sophisticated training gained in Paris and New York City produced a painter of consummate skill who may be about to gain fresh recognition.

The exhibition represents something else too. On our college tour five years ago, the sales pitch we heard at several colleges, of which Dickinson would be Sarah’s early-decision choice, echoed one another. All the professors teach undergraduates, we were told. Students get to do real research. For me, the appearance of the 26 paintings and drawings at The Trout Gallery constituted the fulfillment of the promises made by a Liberty Cap to a 17-year-old and her father in August 2008.

Schlitt’s seminar nurtured the curiosity of 10 students, exposing them to beauty, demanding of them critical thinking. The rewards? A credential gained, a collaborative experience and the confidence on display that Friday in February at having both completed a truly professional endeavor and advanced the understanding of an artist of whom little had been written.

As parents, my wife and I felt as if we were standing in the departure lounge. We understood with sudden clarity that we were there to wish Sarah and her cohort well as they embarked upon the next leg of their journeys. Several class members are bound for graduate school in art history, but whatever their eventual destinations, all will be off to seek their own, independent places in the world. They’re better equipped to do so, I believe, thanks to their sojourn in Carlisle and, in particular, their venture into the picture space of Frank von der Lancken.