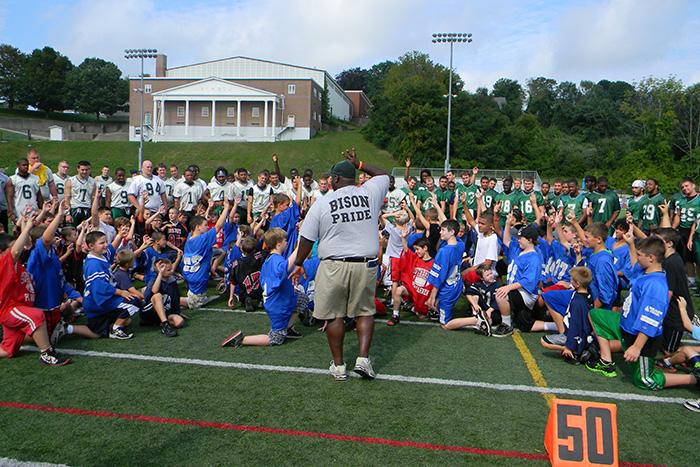 The first time Kevin Loney ’99 set foot on Dickinson’s campus, he was 9 years old, visiting Carlisle with his mother. He returned a decade later as a Red Devil. Now, as he embarks on his first season as head coach of the Nichols College Bisons—as the first and only African-American head coach in the New England Football Conference and one of only eight in NCAA Division 3—Loney brings with him important lessons from his time at Dickinson.

In 1997, as a first-year walk-on, Loney joined Red Devils football in the wake of its seventh consecutive Centennial Conference championship. “It was a pretty exciting time,” Loney recalls.“I learned how to win at Dickinson.” Head coach Darwin Breaux remembers him fondly as “a great kid, a tremendous program player. He was a really committed team player.”

The football team was not the only community in which Loney played an active role. He was deeply involved with multicultural activities on campus, including the African American Society and the Latin American Club, and, during his senior year, he lived in the Multicultural House, then on West Louther Street.

Though Loney reports never feeling marginalized or discriminated against by anyone on campus, he notes that he often wore Dickinson memorabilia when he ventured off campus—a behavior he describes as a “defense mechanism.” Wearing Red Devil garb ensured that the local community could easily recognize him as a Dickinsonian. “The people at the bookstore must have loved me,” he says with a laugh. His time at Dickinson also saw an expansion of the Office of Multicultural Affairs and an increase in diversity on campus. During the interview process for his current job with Nichols College, he says, the issue of race never came up, nor did he expect it to.

In the Dickinson classroom, Loney discovered a passion for studying religion—and he switched his major from biochemistry early in his collegiate career. Though he jokes that a religion major meant “he spent four years never being wrong,” he considers the course of study to be “quintessentially liberal arts” in its interdisciplinary approach and focus on understanding and communicating ideas.

His religion background has aided his coaching career in unexpected ways—he was the defensive coordinator at a military school, Norwich University, on Sept. 11, 2001. “We had kids from all over, kids from all different backgrounds,” he explains. “How do you get them to gel? Part of that is, can you understand each other? [Are] you willing to have intelligent dialogue and come to a fair conclusion?”

After spending the past two years as defensive-line coach at Upper Iowa University, a Division 2 school, Coach Loney is pleased to be at Nichols, a college of about 1,500 students in Dudley, Mass. In the New England Conference, he is one of three Dickinsonians who are now head coaches in the division (the other two are Bobby Chesney ’00 and Keith Emery ’94).

Loney reports that most of his former coaches are still at Dickinson and that he has modeled the Bisons on the Red Devils in significant ways. Academic success is important to him— “a team with good grades cares”—as well as leadership. “I want our kids to be the leaders of our campus,” he says, “I want a group of kids who come out, and everyone knows the football team is taking the lead in our community.”