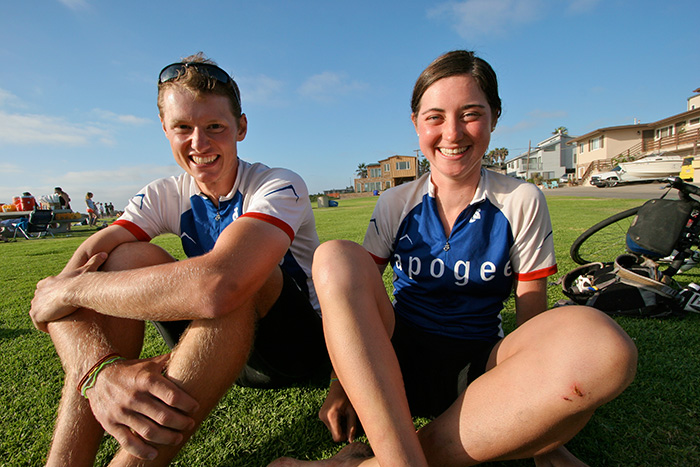 Kevin Cashman ’95 gets a little sentimental about the kids he’s taken on Apogee Adventures trips. “There was a boy in 2004 named Seth,” he recalls. “He was socially awkward, just starting at a new school.”

Seth’s father had signed him on for a two-week biking trip from Maine to Quebec. “At first, Seth struggled physically and socially,” Cashman explains. “But after a few days he really got into the trip routine and developed great friendships. He had a blast.

“When his dad came to pick him up, Seth said his goodbyes with tears in his eyes,” Cashman continues. “He was trying to find a place where he could be himself, and he found it over those two weeks.”

During his years as a Dickinson geology major, Cashman worked summers at children’s camps, mainly in Vermont. After graduation, he worked for an outdoor-adventure company based in Massachusetts. Those experiences inspired ideas for a program of his own.

In 2001, he and wife Birgitta Peterson ’96, who helped found Dickinson’s ultimate Frisbee group Jive Turkeys, expanded Cashman’s musings about a summer children’s program into an opportunity for youths, ages 11-18. Their concept was to build bonds through challenge and service. “Birgitta is from Maine, and we wanted to start a family there,” he explains. They moved to Brunswick and launched the company.

That first year, “We ended up with 15 kids—almost half were partial pay or no pay at all,” says the father of two. “Even though it was hard, I had no intention of giving up.”

Now celebrating its 10th anniversary, the company has hired 25 trip leaders to direct about a dozen adventures for almost 300 participants. The trips range from a spin around Cape Cod and Nantucket (challenge level two) to a six-week-long coast-to-coast bike tour across the United States (challenge level 10). The aim is to encourage participants to find their apogee, or highest point of achievement.

The bike tours also incorporate some element of community service, such as a Puerto Rico adventure that offers participants about 60 hours of repairing rain-forest trails and planting trees in a coastal wildlife refuge.

For a trip to be successful, it needs a dedicated group of student leaders, according to Cashman. Apogee Adventures hires responsible college students who can think quickly and adapt to unforeseen situations. To find those student leaders, Cashman visits liberal-arts colleges throughout the northeast, particularly Dickinson.

“I don’t know if Kevin realizes this, but it’s very similar to the Dickinson experience,” says Lonergan, an international business & management major. “It’s all about the personal interaction with leaders and peers.”

He adds that Dickinson students are perfect leaders for Apogee trips because of their global awareness and sustainable practices.

The company also offers recent graduates like Cait Bradley ’08 an opportunity to find their passion. “I wasn’t 100 percent sure what I wanted to do out of college,” she recalls. After seeing information about Apogee at the Career Center, she interviewed with Cashman and began working for the company that summer.

Bradley, an NCAA national steeplechase champion and a recipient of Dickinson’s Richard H. McAndrews Award for Outstanding Female Athlete, is now an assistant track and field coach at Hamilton College. She continues to lead trips and anticipates a new trek this summer through the sunflower-lined countryside of Tuscany, Italy.

“Sometimes you think there’s a narrow path” to follow after college, says the former mathematics major. “Apogee Adventures really opened my eyes to the idea that I can be passionate about my job. It set the standard for what I can do for the rest of my life.”