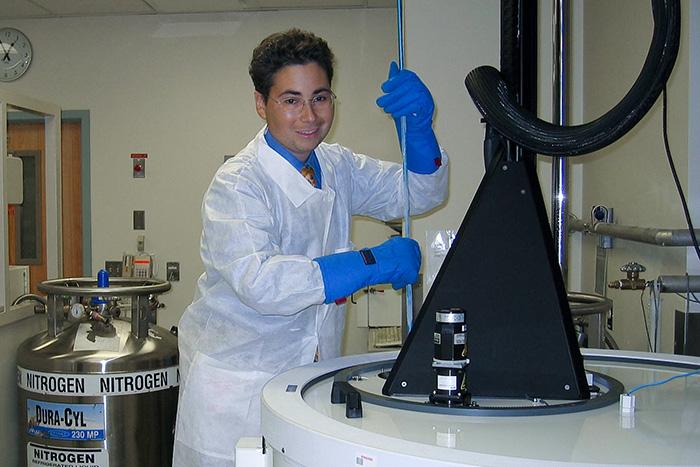 Twenty years ago, Jay Feinberg ’90 received a chilling diagnosis. His chances for survival were meager, and a factor in those depressing odds was his ethnicity.

“When I was diagnosed with leukemia in 1991, I was told because I was Jewish the likelihood of finding a match [for a bone-marrow transplant] was pretty much slim to none,” he recalls.

If a person suffering from leukemia, lymphoma or other blood disorders can’t find a match within a family member, the next step is finding a stranger with a similar genetic profile. Feinberg, whose ancestors were Ashkenazi (East European) Jews, had limited opportunities, since the Holocaust had wiped out millions of potential matches. With the small number of Jewish donors in the registry at the time, he had a less than 5 percent chance of finding a match.

For four years, his friends organized blood drives, to no avail. Feinberg, a Dickinson political-science major who’d been law-school bound before his diagnosis, was gravely ill and giving up hope. He was persuaded to hold one more drive—and the very last donor proved to be his match.

“Today, for Jewish patients, up to 70 percent will find a match,” he says. “We’ve come a long way, thankfully.”

Feinberg’s efforts to register Jewish donors through the Gift of Life Bone Marrow Foundation, which he founded in 1991, not only has benefited his own ethnic group but others.

“We have a recruitment group within Gift of Life called Swab a Cheek, Save a Life that focuses on increasing participation of other minority groups,” he explains. Using his original model to reach people of color, “We work to replicate the success of the Jewish community so that everyone has the opportunity to receive a bone-marrow transplant.”

Ten years ago there were 7 million people listed in bone-marrow registries worldwide; now there are 15 million. Gift of Life has contributed 180,000 of those potential donors, testing 28,000 people last year. About 2,200 bone-marrow, blood-stem-cell and umbilical-cord-blood transplants have resulted from Gift of Life’s drives.

In the last 10 years, Feinberg’s organization has grown from one paid employee working out of a small, donated office in Delray Beach, Fla., to 30 people just in his Boca Raton office, his second new and larger location in a decade. He has 10 other employees, four of whom are in Israel, the rest in New England and the New York metropolitan area. About 1,000 volunteers conduct the nearly 800 Gift of Life drives per year, which no longer require drawing blood. Today, the drives involve a simple cheek swab.

The life-saving success of his organization earned Feinberg the Jewish Community Hero Award, given in New Orleans in November by the Jewish Federation of North America. Feinberg was the inaugural Bronfman Prize recipient in 2004, and, in 2005, Yeshiva University awarded him a doctor of humane letters, along with Hillary Clinton. White House invitations, most recently to meet the Obamas in December, have enabled him to share his mission with the last two presidents.

Feinberg was pleased to hear that the same month he received his latest award, a fellow Dickinsonian had given stem cells for transplantation in a 20-year-old man with leukemia.

Somewhat surprisingly, that donor, Aimee Matlack Heinly ’95, was around her recipient’s age when she was tested in 1991 at Dickinson—in a drive meant to find a match for Feinberg.

Heinly was contacted by a bone-marrow registry in July and told she was a match. In November she drove from her home in Poughkeepsie, N.Y., to a hospital in New York City. For a few hours she sat while blood was drawn from one arm, blood stem cells were removed, then the blood was returned to her other arm—a process called apheresis. It’s much more common and less painful than the old method of collecting bone marrow from the back of the hip.

No longer the coed joining her friends at the bone-marrow drive in a HUB side room but now a stay-at-home mother of three, Heinly reflects on the experience. “I was inspired by Jay [to join the drive 20 years ago]. The nice thing is you get in the bank, and even if you can’t help that particular person, somebody else might benefit from it.”

She hopes her experience will cause others to participate—now requiring just a simple mouth swab rather than a blood test. “Lots of times the stories people read inspire them to want to help.” Meanwhile, she’s hoping to hear in a few months from the registry about her anonymous recipient’s fate.

Feinberg keeps in regular contact with his own donor, Becky Faibisoff. And each July 28, on his “transplantaversary,” he calls and sends her flowers. “My celebration is being alive every day,” he says. “I’ve been fortunate to participate in doing this kind of work. That’s what it’s all about.”