First off the Block 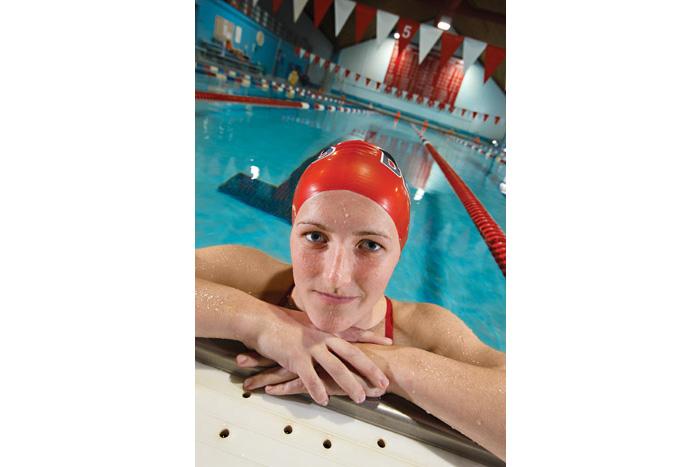 It’s like one of those commercials engineered for the post-Super Bowl confetti storm: “Caitlin Klockner ’16, you’ve just won the McAndrews Award, earned first-team All-Centennial Conference (CC) honors and broke four school records during your first year as a Red Devil swimmer. What are you going to do next?”

Except she doesn’t say, “I’m going to Disney World!” She gets mentally back in the pool instead of in line at the Tower of Terror. “I want to see that I’m still improving, to see my time drop in events,” she says. “This year there isn’t as much pressure, but I’m hoping to still improve.”

If she improves too much, it’s going to get a little scary for Dickinson’s opponents, especially Franklin & Marshall College, which she cites when referring to her favorite moment of last season. “It was a really close meet and really competitive, and it came down to the last relay,” Klockner says. “We were all excited to come away with that win.”

Klockner began the deep dive into swimming at age 10, when she joined a winter swimming league. Her mother was a swimmer, so when Klockner started getting competitive in high school, it wasn’t much of a surprise. “I’ve just always loved being in a pool,” she says. “Every summer we went to Ocean City, Md., and I lived in the ocean.”

Before Klockner, no first-year female athlete had been awarded the McAndrews, which recognizes student athletes for both sporting and academic achievement. But in a year that saw her take All-CC honors in the 200 individual medley and as part of the 800 free relay team, she must have been the odds-on favorite.

“I’m really proud to have won it,” she says. “It’s a big deal, so it felt really good that people thought I should get an award like that.”

“Caitlin’s a tireless worker in practice,” says Paul Richards, swim coach and director of aquatics. “She’s goal oriented and focused—a fierce competitor when it comes time to race.” That competitive streak showed up for the CC championships in early 2013, when Klockner placed third in 100 and 200 free-style events and totaled a staggering 82 points overall.

Klockner goes into her sophomore season holding school records in the 200 individual medley (which she broke twice) and the 100 freestyle and two more as part of the 400 and 800 free relay teams.

But it’s not all about swimming for Klockner, who chose Dickinson for the Division III experience. “Looking at colleges, I didn’t want the main reason to go to a school to be swimming,” she says. “But I loved the team and the coach and the program. I already have such good friends here, even after only a year.”