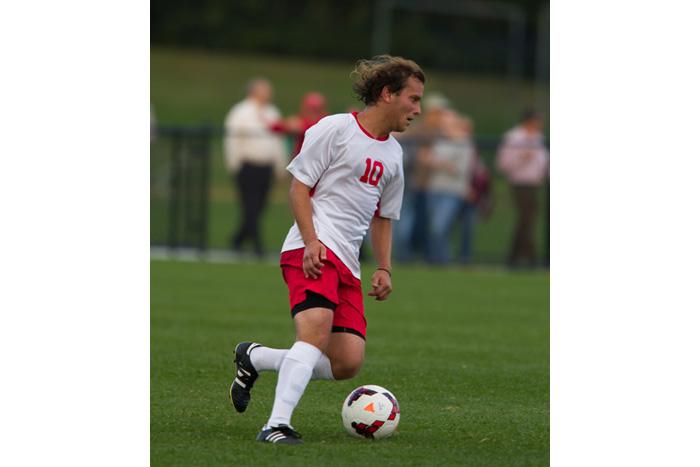 Javier Mena '14 had an outstanding career, earning CC Player of the Year in 2012 and becoming the program's all-time leader with 23 career assists. He was a four-time All-Conference player, earning first-team recognition in 2011, 2012 and 2013. Photo by James Rasp.

The Red Devils had one of the best seasons in program history, advancing to the Centennial Conference (CC) semifinals, finishing with a 12-6 record overall and 7-3 mark in the conference. Catherine Perlmutter '17, Erica Marshall '17, Katy Schlechtweg '14 and Natalie Polk '15 were named to the All-CC team. Perlmutter also was named the CC Rookie of the Year while Schlechtweg garnered the CC's inaugural Scholar Athlete of Year award. Head coach Caitlin Williams was named Coach of the Year as the Red Devils set school records for goals, assists and points in a season while breaking the program record with 10 straight wins.

The men's soccer team had an outstanding year as well, advancing to the conference championship game and earning a third straight NCAA Tournament bid. Nationally ranked for most of the season, the team earned the right to host the first two rounds of the tournament at Phyllis Joan Miller Memorial Field. The Red Devils suffered a second round loss, finishing 15-6-1 on the season. Derek Kachadurian '14, Jamie Martin '14 and Javier Mena '14 all were named First-team All-Conference. Mena tallied two assists in the opening round of the NCAA Tournament, becoming Dickinson's all-time leader with 23 in his career.

The team came up just shy of a bid to the CC playoffs. The Red Devils finished 8-7-2 overall and 4-4-2 in the CC. Defender Hannah Matlack '16 earned First-team All-CC honors while forward Rosalin Savoie '14 was named to the second-team, scoring seven goals and handing out a pair of assists. The Red Devils had another outstanding year, defensively. They allowed just 18 goals on the season, posting seven shutouts. Jenna Lamb '16 opened the season with a hat-trick and led the team with nine goals and two assists on the year.

The men's cross country team enjoyed another successful campaign, despite battling numerous injuries throughout the season. The Red Devils placed second at the Conference and Regional Championships to earn a seventh consecutive trip to NCAA National Championships. Dickinson captured an unprecedented 17th straight Little Three title while Ryan Steinbock '14 ran to the 14th straight individual title and became the fourth All-American in the men's program's history. The Devils earned six spots on the All-CC team, led by First-teamers Henry Mynatt '14 and Steinbock, and had five runners earn All-Mideast Region honors.

The volleyball team showed much improvement, despite finishing 6-16 on the season. Jenn Morrissey '16 became the seventh player program history to record over 1,000 assists. In just two seasons she tallied 1,082 to rank seventh all-time. Grace Morgan '14 finished her career eighth in assists with 981. Laura Silverman '16 and Emily Smith '16 led the attack with 225 and 184 kills, respectively. Four players were named to the CC Academic Honor Roll.

The Red Devils had some strong individual performances on the season, finishing 3-7 on the year. Michael Miller '14 and Mitch Helmandollar '15 were named to the All-CC Second-team on defense while Shawn White '16 earned honorable mention as a running back. Josh Schwartz '16 was selected to the Co-SIDA/Capital One Academic All-Region team while 15 players joined the CC Academic Honor Roll.