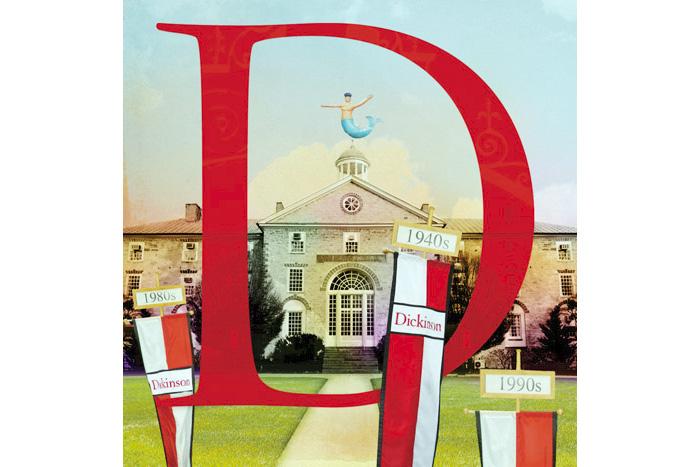 September 28 was a red-letter day for far more than Dickinson’s new president, Nancy A. Roseman. Inaugural plans called for having, in addition to faculty members and dignitaries from other colleges and universities, a Dickinson graduate representing each decade—1940s through 2010s. Amazingly, I was asked to represent the 1940s and carry the decade banner in the procession. I accepted with astonishment and pleasure.

The day dawned with friendly skies—slightly overcast, but the absence of searing sun proved to be a great blessing during the ceremony. Upon arrival to campus, my husband, Jack ’48, and I headed for the library, as instructed. There he was greeted as a “special guest” and escorted (actually golf-carted!) to the inaugural audience area in front of Old West, and I was impressively robed, hooded and mortarboarded … and I warily eyed the eight-foot banner I would carry in the procession.

Suitably attired in my ceremonial garb, I hobnobbed with professors and graduates at a continental breakfast, and then the procession was put into formation. I took a deep breath and tentatively hoisted the ’40s banner (hmm … not too heavy!), and off we marched from the Waidner-Spahr Library to Old West. The eight decade delegates followed directly behind the mace bearer and the Dickinson and U.S. flags, with about 150 robed dignitaries behind us in their resplendent regalia.

The program unfolded on a roomy red-carpeted stage back-dropped by Old West and banked with mums. Several speakers offered us reminders of Dickinson’s noble history and past glories and glimpses of her future plans. Then the Red Devil String Quartet delighted us with a beautiful Sibelius musical selection.

A collegial introduction by Northwestern University President Morty Schapiro gave us insight into President Roseman’s past accomplishments. Then she spoke, warmly and wisely, and donned Dickinson’s handsome red presidential robe to great applause. Her friendly greetings and her engaged conversation throughout the day charmed everyone, and we concluded that Dickinson surely will continue to thrive with her at the helm. As Jack remarked, “We’ve observed Dickinson presidents from Prettyman to Durden, and we feel that Dickinson has chosen wisely and has a bright future ahead.”

The ceremony closed with a spine-tingling rendition of our alma mater by the Men’s Glee Club and the Octals and the ringing of the Denny Bell.

A delicious lunch on Belvedere Field preceded the football game, and, rising to the lofty demands of the occasion, Dickinson crushed Moravian 31-7 in the Homecoming game. I felt like a coed again as we rooted for the Red Devils one more time and joined in cheers—some old, some new. It was great fun to watch the cheerleaders and to marvel at a halftime presentation by Synergy, one of Dickinson’s dance teams.

To add to what was already a great day, we had one more event to attend—President Roseman’s reception on the Weiss Center lawn. (We old dinosaurs knew it as the Phi Psi lawn.) A gleaming white tent, elegantly skirted bistro tables with live-flower centerpieces, upscale appetizers, wine and soda and chocolate-dipped strawberries for dessert. Yum! Who could ask for more?

Well, actually there was more. At 8 p.m., the Homecoming/Inauguration celebration continued with dancing at the HUB. Surely it was fantastic, but, I confess, our day had started at 6 a.m. and we were homeward bound at dusk.

In addition to having a wonderful time and feeling elated about President Roseman, Jack and I agreed that all the Dickinson personnel were absolutely outstanding. The advance directions that reassured us, the delightful golf cart rides from one event to another, the warm personal greetings, the patient ears that listened to all of our “I remember when …” stories. Thank you all so much! Your love for all things Dickinson shone through, and you made it a truly red-letter day.