The Faculty Band Plays On 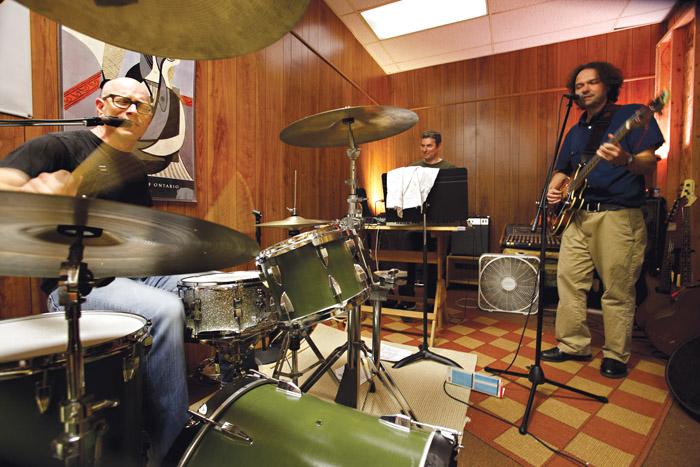 As far as instruments go, the members of the faculty band play "pretty much everything," and here we find Cotten Seiler on drums, Shawn Bender at the keyboard and Ed Webb on guitar. Photo by Carl Socolow '77.

The club is filled with fog. There must be a machine plugged in behind some gear somewhere. It’s thick and goes a long way toward obscuring the screaming fans that surge around the band as they play.

On stage, guys with titles you don’t want to read in a story about a band are ripping it up: Cotten Seiler, associate professor of American studies, clutches his guitar and howls into the mic. Ed Webb, assistant professor of political science and international studies, pounding the keys, is hiding behind what Seiler calls his “beautiful raven locks.” And Shawn Bender, associate professor of East Asian studies, is perched at the drum kit, pounding savagely on his piccolo snare. Piccolo snare?

But before anyone realizes that there is no fog, that the band is in Webb’s living room, that the fans are friends and colleagues, casually watching while sipping drinks, an angry neighbor is at the door, and “Purple Rain” will be the last song of the night for what is known only as the faculty band.

“It was 2009,” says Bender. “Ed had a party, and we played ‘Purple Rain.’ They brought me up for a guest spot. I was hitting the piccolo snare and the neighbor came and complained. From that moment on, we’ve played together.”

Separately, each member of the band has played music for ages. Bender has been at the drums since third grade. Webb had some training in violin, French horn and alto sax, but he doesn’t play any of them anymore. And Seiler, starting as a drummer, was in bands in college and switched to guitar in grad school, when he also started to sing.

Now they all can handle “pretty much everything” instrument-wise, and the songs they play together range from Joy Division’s “Transmission” to Rihanna’s “Umbrella” (“We really need to find someone to sing that one,” says Seiler).

But the band’s sweet spot, according to Bender, is the thin but fertile window from 1979 to 1981. “Our Venn diagram is pretty close in terms of our ages, so we have nostalgia for the same period,” he says. “Any song that came out then, we know and love.” Or almost any song.

“There’s a trans-Atlantic cultural divide at work,” says Webb, who hails from England. “The stuff they grew up listening to wasn’t exactly the stuff I grew up listening to.” Bender and Seiler murmur, knowing where this is going, and Webb starts to laugh. “I don’t know any Journey songs at all. But apparently everybody in this country knows everything they ever did.”

So when someone is having a party in town and they want a band who doesn’t play Journey songs, the band might get called in, but it’s not the buzz of the crowd that keeps them coming back together.

“We just get together and play because we enjoy it,” says Bender. “We’re not really targeting performances. It’s more stress relief. To imagine having people pay money to hear us play—”

“Oh, no,” Seiler interrupts, laughing. “I’d like that. But we do revel in our amateurism.” And that amateurism … would having an actual name for the band shatter the garage-band vibe the trio cultivates?

“To have a name is almost too formal in a way,” Bender says. “Although it might be nice to have a name, maybe.”

“When we played Senior Club we sort of called ourselves Rogue EQ and the Unknown Unknowns,” Webb says, noting that Erik Love, assistant professor of sociology and guest singer, and Marianna Doherty, LIS computing specialist and bassist, were part of that short-lived iteration. “But that was for just that one gig.”

“And we don’t want some professorial name, like the Bluebooks,” Seiler adds.

“I was thinking of bad names for a college professor’s band,” Seiler says. They all groan, and for now “the faculty band” will just have to suffice.