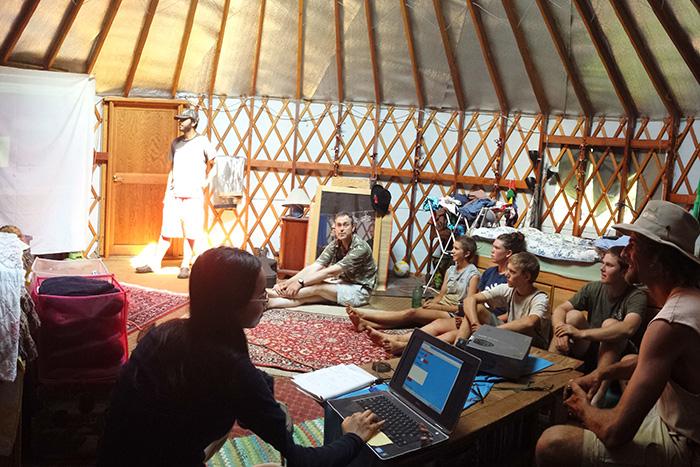 When you think of farming, it’s all about software, algorithms and the Web, right? Programming languages, rapid prototyping and decision sciences? No? Well, it might be soon, as Dickinson professors and students have been teaming up to bring Farming 2.0 to the forefront at the College Farm.

Think about the farm and its 24 fields and 13 crop groups to plant. Then think about the onerous task of determining what crops to plant in each field and jockeying them each year to hit certain yield targets, control pests and disease, fertilize, account for fallow periods and nitrogen levels and plan for soil depletion and weed control.

And remember that what the farmers do this year might have ramifications up to four years out.

But guess what? It gets worse: The model created to automate the crop-rotation schedule at the farm—ROMO (Rotation Optimizing Model)—ended up having more than 9,000 variables and 13,000 constraints.

“This is a tough optimization model to deal with,” says Associate Professor of Mathematics Dick Forrester, who, with Miguel Rodriguez ’13, took on the modeling project last year. “It’s far too complicated for a human to make these decisions, way more complicated than it seemed at first—so many fields, so many variables.”

Forrester had heard about using decision sciences to determine a crop-rotation plan, so he contacted the farm about developing such a plan. What made it tough was that neither Forrester nor Rodriguez, whose background is in computer science and math, knew anything about farming.

“Most of the real-world applications of mathematics that I had been exposed to had come from fields like economics, engineering, physics or chemistry,” says Rodriguez, explaining that he initially was scratching his head about math’s application to an agricultural endeavor. “But once I started learning more about crop rotation, it was easy to realize that designing a rotation is nothing more than making yes or no decisions. And I knew this could easily be turned into math.”

Once he turned it into math—specifically math within the realm of decision sciences, which uses mathematics to make complicated decisions—Rodriguez found his footing.

“Miguel spearheaded this,” says Forrester, who notes that Rodriguez is now in graduate school at Clemson University, where Forrester earned his Ph.D., and he’s even taking classes with Forrester’s Ph.D. advisor.

“It was his project, and he spent hours thinking about it, e-mailing me in the middle of the night with ideas he had.”

Before ROMO, Matt Steiman, the farm’s assistant manager, worked out the variables and constraints in a spreadsheet, using his agricultural knowledge and educated guesses toward engineering the whole thing. But one wrong move would find the farm boxed into a corner, locked into a rotation for years.

The new system provided Steiman with a tool that designs four-year rotation schedules in less than two minutes, and by the 2014-15 season, the model will be 95 to 100 percent accurate for the farm’s needs.

“I think my record shows that ROMO saved me 999,024 headaches compared to the old way of doing things,” Steiman says. “Crop rotation on diverse vegetable farms is complicated and time-consuming. When you get down to business, it is certainly a headful of information, and it’s great to have ROMO there to take on the hard work.”

This summer, Associate Professor of Computer Science Tim Wahls brought in Asir Saeed, Yutong “Mia” Shang and Edwin Padilla, all class of 2016, to develop Web-based software (dubbed FARMDATA) for the farm, which now allows farm staff to enter planting, harvesting and sales information from any networked device and run queries/reports against any data inputted.

Start to finish, the group had just two and a half months to get the project up and running. “Normally something like this would take a year, so it was intense,” says Padilla, whose participation was funded through a National Science Foundation Science, Technology, Engineering and Mathematics Talent Expansion Program (STEP) grant. “The learning curve was exponential at first, because we had very little experience with any of these languages, so we just had to adapt and experiment.”

The computer languages the group absorbed were JavaScript, PHP, CSS, HTML and SQL, and they went a long way toward helping achieve the project’s goal: bringing the farm’s existing tracking software to the Web and making its capabilities more extensive, per any requests made by Steiman.

“In the past we had significant problems with incomplete or incorrect records,” Steiman says. “FARMDATA uses smart forms to minimize errors in recordkeeping, and the live digital database builds upon itself throughout the season,” which Steiman says allows the farmers to access the current season’s records from the field to make real-time decisions.

“We listened to our client, Matt, to see what he wanted and then made changes to see if it met his requirements after he tested it,” says Shang, who, along with Saeed, came to the project through a Dickinson student-faculty research grant.

“A lot of what we do here is similar to what we’d do in the workforce,” says Saeed, who gave life to the project when he asked Wahls about doing a research project together. “It’s important to have these opportunities, particularly on campus, because it provides us with that stepping stone that we need to get out there and have something on our resumés. It’s very professional.”

The software has been such a success that it’s likely other local farms will start using it, which might mean some follow-up work for Wahls’ students, who already are exploring GIS/map-based enhancements and other features.

“It’s customized for the Dickinson farm, so we’d have to make a more general version, so it fits more farmers,” says Padilla. “Or it might need to expand for even more uses on the farm. Either way, we put in a lot of hard work, so seeing the farmers’ reaction has been great.”