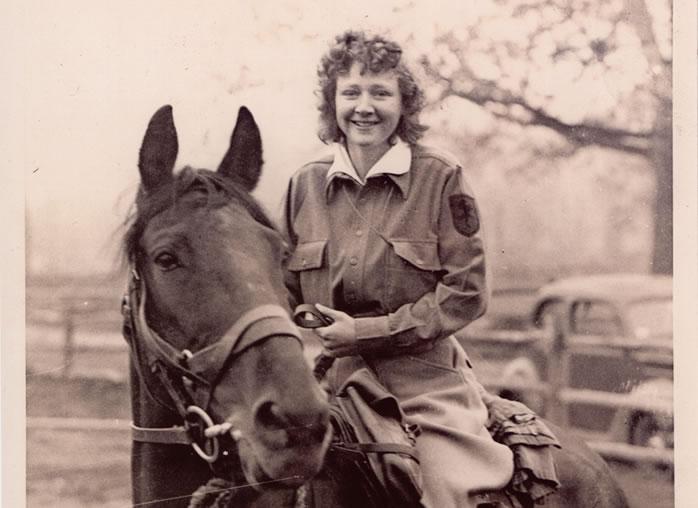 "My sister, Marg Fuller '43, was rumored to have led a horse up the steps of Bosler Hall. Is this true?" —Jack Fuller '47

On page 4 of the Nov. 16, 1939, issue of The Dickinsonian, a headline declares “Pranksters Place Horse Prominently,” janitors having -discovered said horse on the stage of the chapel in Bosler Hall. The article mentions that the “culprits were not apprehended,” and it does not appear that Margaret Fuller ’43 (pictured above) was ever identified as the responsible party. With no one to blame, the owner of the horse demanded $200 from the student body for unspecified damages. A brief article on Feb. 29, 1940, suggests that payment would be made by the Student Senate. Fuller transferred from Dickinson after completing one year of study, so we can only imagine what else she might have cooked up had she stayed.

Student pranks have been a part of campus life throughout Dickinson’s history. Stories of tarring blackboards, removing the clapper from the college bell and putting hot pepper on classroom stoves are relatively common. Amidst these somewhat routine acts of mischief, the incident of the horse in the chapel stands out.

Another of the more innovative pranks involved the mermaid atop Old West. While stealing the mermaid became something of a tradition by the mid-20th century, a group of freshmen in 1915 had a different approach. Having “borrowed” the college chaplain’s bicycle, the students ascended the cupola and tied up the bike, giving the mermaid the appearance of riding it. Frank Masland, class of 1918, described his role and the challenges of this particular prank in a 1982 letter to College Archivist Martha Slotten.

But by far, the greatest prank ever pulled was one that left college president Jesse T. Peck detained at an insane asylum. Wanting to exact revenge for his friend’s punishment, Moncure Conway, class of 1849, a senior at the time, wrote to an asylum in Staunton, Va., alerting officials there that a deranged man claiming to be president of Dickinson College would be arriving by train; President Peck already was scheduled to attend a conference of Methodist ministers there.

Peck was apprehended at the station and taken to the asylum, and it was several hours before other ministers at the conference were able to vouch for their colleague. Conway finally confessed to this prank 26 years later in a letter to The Dickinsonian. One can’t help but wonder how Peck, by then a bishop and a trustee of Syracuse University, reacted upon learning who was responsible.