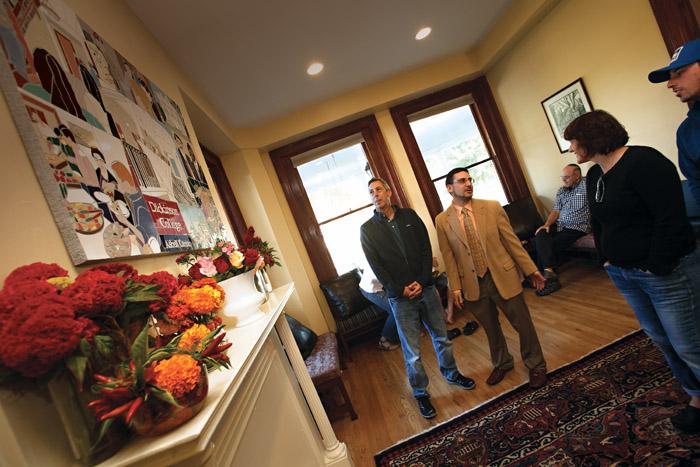 From the inauguration of Nancy A. Roseman as Dickinson’s 28th president to the 493 yards gained in the Red Devils’ 31-7 steamrolling of Moravian College during the Homecoming game, everyone who attended Homecoming & Family Weekend had extra reason to celebrate.

The Milton B. Asbell Center for Jewish Life also unveiled a new tile mosaic to mark its 10th anniversary. Made by artist Jonathan Mandell from hand-blown glass shards, ceramic tile and assorted semiprecious stones and minerals, the mosaic features campus scenes and portraits of two individuals who are considered to be foundational to Jewish life at Dickinson: Paul “Pappy” Hodge, Phi Epsilon Pi’s storied house manager; and Ned Rosenbaum, retired professor of religion and classics, who was the primary force in launching the Judaic studies program, one of the first in the country.

“I’m thrilled with how it turned out,” said Ted Merwin, the center’s director and associate professor of religion and Judaic studies. “It went through many different iterations as we got a lot of student input, input from alumni. We really wanted to get it right.”

And speaking of getting it right, delegates representing 63 U.S. and international colleges and universities filed down High Street toward Old West, and hundreds of attendees streamed through every entrance to the lawn of the John Dickinson campus for the inauguration ceremony Saturday morning. In her opening remarks, Jennifer Ward Reynolds ’77, chair of the Board of Trustees, noted Roseman’s desire to be a part of the Dickinson community and its rich history. “She didn’t want to be president of a college,” said Reynolds. “She wanted to be president of this college.”

The celebration continued throughout the weekend, with Fall Fest on Belvedere Field and an open Inauguration Celebration on Britton Plaza and the Social Hall in the Holland Union Building. Dickinson’s newest members of the Sports Hall of Fame also were fêted on Saturday: Kimberly Selemba ’01 (basketball), Chavaun Johnson ’03 (track and field), Alexandra Forte ’03 (cross country, track and field) and William Fisher ’01 (baseball). The 1993-94 women’s basketball team was honored for its achievements.

Sunday’s ninth annual Run for Steph, which raised $7,536 for the McAndrews Fund, was occasion for an especially poignant moment, when Amy Rankin ’03 attended for the first time. Rankin was with Stephanie Kreiner ’03 when they were hit by a drunk driver in 2004. Rankin, who has been recovering for nearly a decade from the traumatic brain injury she received as a result of the accident, recently published a memoir of her rehabilitation journey.

This year’s Homecoming & Family Weekend is early (Sept. 19-21), so mark your calendars now.