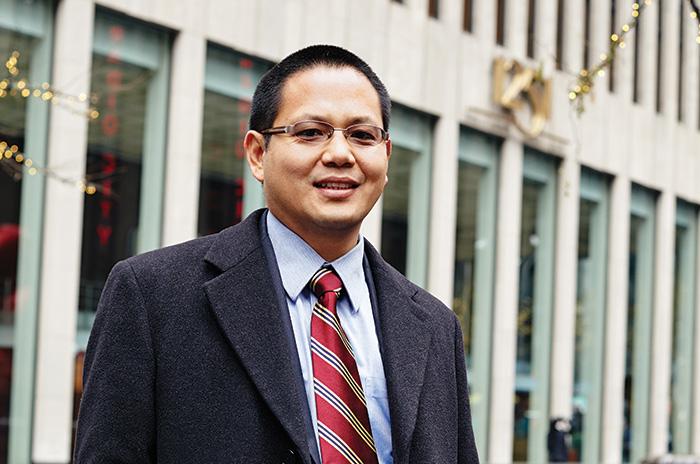 Tibetan Buddhism and investment banking might seem worlds apart, but for Tsewang Namgyal ’97, uniting these worlds isn’t just possible—it’s a source of strength.

“Having lived in a Buddhist community and now in a banking community, I can see the value that each brings to the table,” says Namgyal, whose Tibetan upbringing prized contentment and compassion while his work managing multimillion-dollar transactions as a vice president at Bank of Tokyo-Mitsubishi UFJ has shown him the transformational power of self-interest and negotiation. “Being able to appreciate both cultures allows me to make the best of both worlds.”

And that’s exactly what he’s aiming to do for Tibet. As a member of the board of the Tibet Fund and an active supporter of several Tibetan development nonprofits, Namgyal is dedicated to the endangered culture’s survival. But understanding his market-based approach to advocacy begins with understanding his upbringing.

Namgyal grew up as a Tibetan refugee in northern India. Thanks to a German sponsor who donated $40 a month for his education, he attended a school operated by SOS Children’s Villages, an international nonprofit supporting children in more than 100 countries. In 1992, Namgyal immigrated to the U.S. when he was 20 years old through a State Department program relocating Tibetan refugees. Soon after, he joined the Army Reserves, becoming the first Tibetan to serve in the U.S. military, which—combined with working summers at a foundry in Wrightsville, Pa.  enabled him to attend Dickinson.

“It was tough work,” he says. “But compared to where I’d come from, it was an incredible deal.”

At Dickinson, where he majored in East Asian studies and religion while taking pre-med courses, Namgyal became an advocate for environmental and human-rights issues. He earned the college’s Diversity Education Award in 1995 for his work raising awareness about Tibet, helped organize a successful environmental sustainability symposium as a Clarke Forum intern in 1996 and received the William F. Hufstader Prize in 1997 for his contributions to the college. Yet, what Namgyal prizes most about his time at Dickinson is the liberal-arts education that broadened his perspective and helped him see how individualism could be harnessed for the betterment of the community.

“I used to think that business was the reason for many of the conflicts around the world,” he explains. “Business was driven by self-interest, so I felt that the end result had to be negative. In college, my views started to change. … I developed a great deal of respect for thinkers like James Madison and Adam Smith. They were able to creatively come up with solutions that exploit self-interest to benefit the greater good while mitigating the risks with appropriate checks and balances. Looking at Tibet’s weaknesses politically and economically, it was clear that there was much we could learn.”

This new respect for capitalism led Namgyal into a career in banking after graduation. Following three years’ work on Wall Street, he earned an M.B.A. from the Thunderbird School of Global Management. Today he works mainly on portfolio management for Bank of Tokyo-Mitsubishi UFJ, which finances conventional- and renewable-power projects, including some of the world’s largest wind farms and solar projects.

His experience in business development, debt structuring and loan distribution gave Namgyal an insider’s appreciation of the power of capital, which informs his advocacy work today. Whereas many working to strengthen Tibet see commerce as a threat, he believes that embracing business by encouraging the private sector to play a hand in development can help tackle the area’s political and social challenges.

“Obviously, the answer is not simply pumping money into Tibet,” he explains. “However, if this is done in a smart way in which Tibetans at the grassroots level are involved in policymaking, this would help defuse much of the current ethnic tension.”

“We need to create policies with incentives that attract investors in Tibet and recruit seasoned business people to support Tibet-related development organizations,” he says. “If poverty is a disease, finance is one of the best medicines. Just as a doctor practicing good, compassionate medicine can cure diseases, I believe financiers have the unique ability to alleviate poverty.”

Learn more about Tsewang Namgyal ’97’s thoughts on Tibetan development, the power of compassion and the value of meditation.