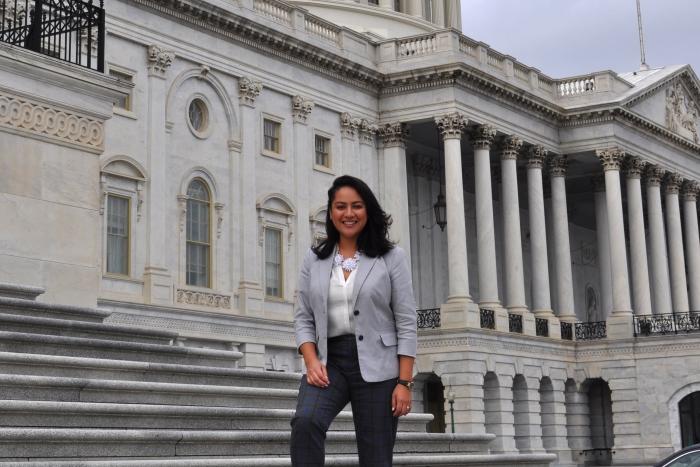 Valeria Carranza '09 is a first generation Salvadoran-American and Posse scholar, whose work on social justice issues has ranged from leading on immigration, LGBT and civil rights campaigns to drafting and securing the votes needed to enact progressive legislation on the federal and local level.

Carranza currently serves as the deputy chief of staff and legislative director for Congressman Adriano Espaillat, the first formerly undocumented member of Congress and first Dominican American in Congress. In this position, she spearheads the congressman's legislative agenda and has drafted more than 20 bills. She also manages the Congressman's robust Washington, D.C., operation. Carranza most recently served as the executive director of the Congressional Hispanic Caucus (CHC). Through this position, she supported the 26 Democratic Hispanic Members of Congress and helped push forward the CHC agenda of empowering Latino communities by advocating for equitable policies, such as protecting Title I funding for low-income students, pushing for pay equity for Latina workers and working to abolish the use of the word “illegal alien” in federal law. In this role, Valeria organized meetings with Democratic presidential candidates Hillary Clinton and Bernie Sanders to highlight the importance of working with the Latino community and prioritizing legislation that impacts working families.

She has served as the legislative assistant for Congresswoman Linda Sánchez of California, and in this role spearheaded immigration, voting rights, education and transportation legislation. She also led the Congresswoman’s efforts to enact into law a local environmental cleanup and park conversion for a low-income neighborhood in California. Previously, Valeria served as the deputy chief of staff to At-Large Montgomery County Maryland Councilmember Hans Riemer. Carranza wrote and lobbied for the enactment of legislation to expand access to child care and the passage of tax credit legislation to help lift working families out of poverty. She also has worked in the office of former Congressman Mark Schauer of Michigan, former Los Angeles City Councilmember Tony Cárdenas, and the Albuquerque City Council. She started her public service in Washington, D.C., as a White House intern and has quickly risen in the federal and local area political scene.

In addition to her legislative experience, Carranza has been selected for numerous competitive leadership programs including the Posse Foundation and Center for Progressive Leadership. She also completed a one year intensive national training program from the Front Line Leaders Academy as one of twenty young up-and-coming political professionals.

Carranza was born and raised in Los Angeles and was the first in her family to graduate high school and attend college. Over the last several years, Carranza and her wife, Lauren, have made their home in the Washington, D.C., region by putting down roots in Montgomery County Maryland. They are currently on a quest to see all 20 Smithsonian Institute museums and galleries in one year.

Tell us about your job.

It's my responsibility and privilege to draft and advance legislation that tries to better people's lives. My favorite part of my job is engaging organizations and community members about issues that matter to them. It is challenging to discover ways to address these issues through legislation or advocacy, and it's the process of determining solutions that really drives me.

My legislative portfolio includes civil rights, education and immigration, and I'm currently working on an anti-bullying bill. Also, I am working with organizations and offices from both parties on legislation that will help strengthen voter protection in light of the Supreme Court's Voting Rights Act decision earlier this year. These are issues that I care about on a personal level, which makes my job all the more enjoyable.

What does Dickinson's "useful education" mean to you?

Dickinson fostered a learning space that not only encouraged but celebrated innovative, "out of the box" and critical thinking. It is these critical-thinking skills that have helped distinguish me from my peers. As a legislative assistant for a member of Congress, I am able to apply these skills when analyzing, drafting and advocating bipartisan support for legislation.

What propels your interest in politics?

My family immigrated to the United States from El Salvador during the violent Salvadoran civil war in the 1980s. During that time, anyone who spoke up against the government or was perceived to have a different viewpoint risked being killed. For my family that meant remaining voiceless and staying far from politics to survive.

My family's struggles motivate me to do something about the disconnect that exists even here in the United States between the government and community. Through my legislative position and during my free time, I constantly work to engage communities that are less civically active and to empower silenced voices to help create social change.

It seems D.C. is a real minefield lately, with all factions under fire. What are your thoughts on the political atmosphere on the Hill these days?

The current political climate has made it challenging for our elected officials to compromise and pass even the most basic legislation. I hope that members of both sides of the aisle can prioritize the people they represent and the issues that are facing Americans rather than play petty political games. The decisions they make or decide not to make have real consequences for the lives of so many people.

If you could work a bill into law on one issue, what would it be?

When I was growing up, my mom worked two minimum-wage jobs to just barely cover living expenses like putting food on the table. This is the same story for so many working-class families. If I could pass one bill this year, it would be to raise the federal minimum wage. It is a problem that many people in our country, like my mom, have to work multiple jobs just to make ends meet. I believe that a living wage is one of the few major solutions to poverty in our country.

My grandma had a second-grade education, and through her hunger for knowledge taught herself how to read and write. She was my hero. Graduating from high school and attending Dickinson with a full-tuition leadership scholarship from the Posse Foundation was a big deal for my family and me. I was the first in my immediate family not only to graduate from high school but also attend and graduate from college. I'll never forget walking down the steps of Old West to receive my diploma and seeing my family smiling from ear to ear. That, and meeting my fiancé ...