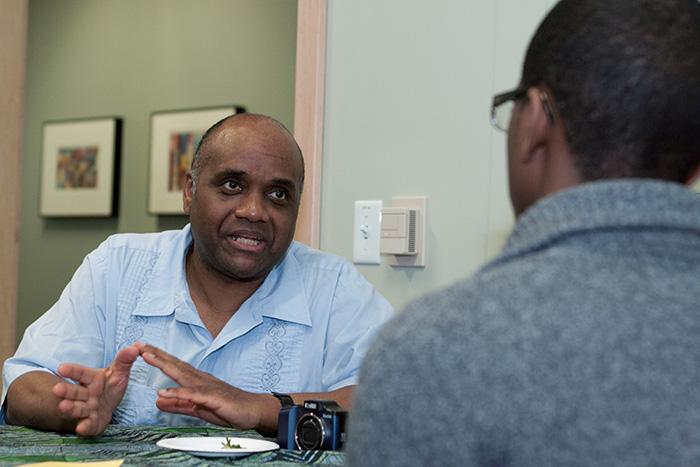 When Komozi Woodard ’71 visited campus in February to speak on The Black Student Movement and the Early Roots of Africana Studies at Dickinson College, he took time to meet with Africana studies students.

Komozi Woodard ’71 knew that the late 1960s were a tough time to start organizing black students at Dickinson. Race riots in Watts, Detroit and his hometown of Newark, N.J., had even small towns like Carlisle, Pa., applying for federal anti-riot grants. It had been only a few years since police had clashed with voting-rights supporters during “Bloody Sunday” in Selma, Ala. And the long shadow of Martin Luther King Jr.’s assassination had just fallen over the country.

On campus, the mere dozen black students struggling to integrate Dickinson’s residence halls faced regular harassment—one of them, Woodard recalls, was chased down the hall by a student wearing a white sheet over his head. The message was clear—organizing could be dangerous business.

“When I got there, the black students didn’t want anything to do with me,” Woodard says. “I was too political.”

To get their support he needed to master a centuries’ old tactic for bringing people together. He needed to learn to play cards.

“I had to learn to play this game called bid whist,” Woodard says with a laugh, his deep-brown eyes lighting up at the memory. “And I had to learn to play it well.” The bridge-like game, long popular in African-American communities, brought Dickinson’s black students together nightly in the student union. But because they weren’t an official student group, they had to pack up their decks at 11 p.m. when the building closed.

“They were really frustrated about that,” Woodard recalls. “So I saw my opportunity. I told them, ‘Well, if we had a black student union, we could have our own room. Then we could play all night.’ ”

Such were the humble beginnings of student-led efforts that launched Pennsylvania’s Congress of African Students, increased support for people of color at Dickinson, prompted the college’s first efforts to make black studies a part of the curriculum and generated a more than 500-percent increase in the college’s black-student population in just a few years.

“The social and the political went hand in hand,” explains Woodard, now the Esther Raushenbush Chair in History at Sarah Lawrence College. “What I’ve learned about organizing is that people may care about what’s going on, but if they can’t even have a party, they don’t think anybody else cares. Having this social space emboldened us to say, ‘OK, well, if we can do this, maybe what we say might matter.’ ”

Soon conversations between hands of bid whist turned to some of the challenges black students faced at Dickinson, and the group decided to make their newfound voices heard. They pressed the administration to increase assistance for struggling black students, convincing the college to establish a tutoring program and a summer transition program.

The new programs, which were Dickinson’s first steps toward providing student services for people of color, paid off quickly, helping the black-student population surge from 12 to 63 between 1968 and 1971. Because the programs were managed through a consortium of five other area colleges, they also bolstered Woodard’s efforts to organize.

“Now we weren’t just getting together with Dickinson students but students from all five colleges,” he explains. “That’s how we went from being an isolated black student union to a statewide Congress of African Students in the 1970s.” By 1971, in fact, the small group of card enthusiasts had expanded to include more than 20 institutions throughout Pennsylvania, uniting more than 300 students to increase voter registration, expand social and political opportunities and push for more courses relevant to the black experience.

At Dickinson, the group had already urged the college to expand its curriculum, which resulted in one of the first black-studies courses and kicked off Woodard’s teaching career. When the college offered Perspectives on Race in 1968, Professor of Sociology Vytautas Kavolis asked Woodard to co-lead the class as his teaching assistant. Stepping behind the lectern planted the seed that would blossom into Woodard’s career as an Africana and black-power-studies pioneer.

“I became who I am today by teaching that class,” says Woodard. “I would have never thought that I wanted to become a professor, but that introduced me to the academic life, and I liked it … That’s something about Dickinson that I’m really thankful for. I could have been seen as a bit of a troublemaker, but Professor Kavolis’ response—and the response of others—was to mentor me. I’m not sure that would have happened at any other school.”

Though the first race-related courses at Dickinson (The Negro American and The Culture of Race Relations) were taught in the 1950s, Perspectives on Race, which attracted more than 100 students, built a more genuine momentum for black studies at Dickinson. Spurred by the course’s success, the college held a Workshop on the Study of Black Culture and Consciousness in 1969, during which Woodard and others pushed Dickinson to seriously consider deeper integration of black and Africana studies in the curriculum.

Woodard would go on to earn his M.A. and Ph.D. from the University of Pennsylvania after heading up economic development for black-power leader and poet Amiri Baraka’s Temple of Kawaida in Newark. With a body of scholarship that includes A Nation Within a Nation: Amiri Baraka and Black Power Politics and Want to Start a Revolution?: Radical Women in the Black Freedom Struggle, he would establish himself as a premier authority on Africana studies and the black-power movement. But one of Woodard’s most enduring lessons in race politics came at Dickinson in the spring of 1969.

On a warm April night Woodard and several other black students gathered outside the Carlisle Municipal Building to protest police treatment of local black high-school students and the city’s recent application for federal anti-riot funds to purchase infrared-scope sniper rifles.  “We were saying, ‘That doesn’t make sense for a riot,’ ” Woodard recalls. “ ‘That’s a murder weapon, and it should be cut out of the budget.’ ”

On their way home, Woodard and several classmates were stopped by police near the corner of West and High streets. The encounter grew violent, and Woodard began to fear for his safety until a group of white students intervened, forming a wall between the police and the black students.

“When I think of them coming down to make that human wall, I always wonder why they did that,” says Woodard, explaining that he and the other students then sought refuge with President Howard “Bud” Rubendall ’31, who took them into his home and helped negotiate a peaceful resolution with borough officials.

“They risked their lives for me,” Woodard contemplates. “That taught me a lot … Whenever I got myself into trouble, there was someone ready to help—whether it was President Rubendall, Professor Kavolis or those students. Someone was ready to help.”

Some historical information in this article was gathered by Caroline Radesky ’09 during a 2010 oral-history project for Dickinson’s Archives and Special Collections.