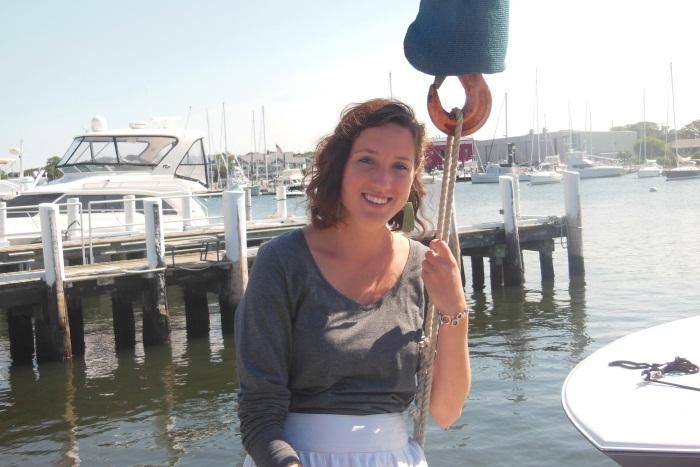 It's been a busy few years for Anna-Lisa Noack '11. International studies and French degree in hand, Noack headed to the Netherlands, where she pursued her master's degree at the Graduate School of Social Sciences at the University of Amsterdam. She did some fieldwork in Kenya as part of the program and graduated in the summer of 2013 with an M.S. in international development studies, heading off then to Rome to work for the United Nations.

Now she's with the U.N.'s Food and Agriculture Organization, working on a joint project with the World Bank.

Tell us about what you do.

As part of the Technical Cooperation and Investments Division at the Food and Agriculture Organization (FAO) of the U.N., I’m exploring the manifold dimensions and discourses around resilience in the drylands of Africa for the FAO’s contribution to a joint World Bank Flagship Report titled "Economics of Resilience in the Drylands of Sub-Saharan Africa." I'm also supporting a team working on a resilience-enhancing project in East Africa with people whose livelihood heavily relies on pastoralism. Concurrently, I'm collaborating with the nutrition department to mainstream and/or include nutrition-specific objectives in projects, program and policies.

How did you get interested in this sort of work?

I've always been interested in food—everything from cultivation to consumption. The Clarke Forum theme in my senior year was "Thought for Food," which really could not have come at a better time.

Building on my bachelor thesis and an independent study that combined gender studies, development and environmental science, I decided that I wanted to understand food security not just from a policy perspective but to grasp the dynamics in "the field." As part of my M.S. research, I lived in a small village in Western Kenya overlooking Lake Victoria and bordering Uganda for over five months. Without electricity or running water, I devoted most of my time to conducting research on the social dynamics underlying the changing food plate, climatic changes, agricultural practices and the policy environment.

I really aspired to find a place in an international organization like the FAO, as I based much of my research on their studies and programs.

What does Dickinson's "useful education" mean to you?

Dickinson helped pave my academic and career path. The international studies exam, for example, despite absolutely terrifying me for an entire year (I don't think I was alone in this), helped me learn to prioritize, work under pressure—while collaborating with a group—and to see connections between a wide variety of disciplines, including economics, political science, languages, environmental studies and gender studies.

Dickinson really encouraged a multidisciplinary education as a way to "engage the world," a phrase I think every Dickinsonian can't help using wherever and whenever possible. And in my master's studies, I quickly realized that the more people specialize, the more difficult it becomes for them to work on an interdisciplinary basis. Being able to think across disciplines no matter your line of work is key to facing many of our challenges today—whether on a local or international level. Most of my work at the moment at the FAO is based not on speaking and listening effectively to French or English but communicating between disciplinary languages.

What was your favorite place on campus?

Definitely the Biblio. It was always a bit noisy and a place to bump into people day or night. It's always invigorating to have some hustle and bustle around you, smell fresh coffee and dive into a book with your back to some sunlight.

The location obviously is great—from the terrace of the FAO offices, I can see the Colosseum, St. Peter's Basilica, the Palatino and snow-capped mountains in the distance. Everyone I meet has lived in a handful of places, speaks several languages and knows exactly what it feels like to start from scratch in a foreign place. And most important, I am working on topics every day that interest me and meeting people who share that same passion.