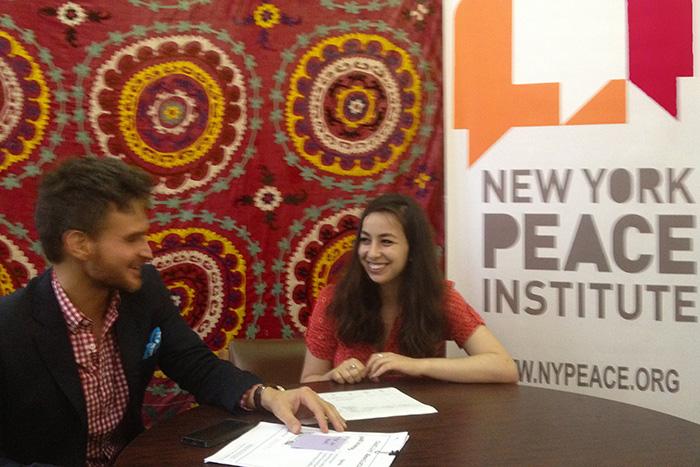 With a pile of case files from the criminal court beside me, I frantically transition between e-mailing mediators and updating the mediation database. A coworker cracks open the door. “The defense counsel for the James* case is returning your call. Line 3,” she says.

I pick up the phone and speak to the attorney for a few minutes about the status of the case and whether her client, the defendant, is interested in mediation. After getting a confirmation, I hang up and dial the defendant’s number. I am relieved to hear that he also is interested and wants to move forward as quickly as possible. We schedule a meeting, and I hang up to update our database.

I glance at the clock above my desk—it reads 1:15 p.m. I have been here for more then four hours and have not even realized it. One thing is certain—there is never a dull moment interning at the New York Peace Institute.

My official position this summer is restorative justice intern, where I manage cases referred to mediation by the New York County Criminal Court. The criminal-mediation resolution is sent to the judge at the defendant’s adjournment date, so the process differs slightly from the common mediation model. In these cases, there is usually a defined offender and victim. I have learned, however, that as stories reveal themselves, there is more beneath the surface that belies the typical victim-offender dichotomy.

Earlier this summer, I had the privilege of attending the annual Alternative Dispute Resolution Conference, where mediators and conflict resolution specialists from all over the country came to present their research and to network with those new to the field. One of the lectures I attended dealt with non-verbal communication--the signs we give off from our body language and the tone of voice that ultimately set the foundation of any conversation. It’s incredible to see how much we can add to an atmosphere before we even open our mouths to speak.

I also have been able to sit in on a couple civil-court mediations. Each session starts the same: Two parties enter the room, vexed and agitated, choosing seats opposite each other at the table. The mediator pleasantly explains what mediation is—a voluntary conversation between two people that is overseen by a neutral, trained mediator. He stresses that an agreement is not mandatory, that the focus of the conversation is to understand the conflict and to find ways to deal with it.

The parties nod curtly, and the plaintiff initiates the conversation by explaining her side of the story. Eventually, both parties have offered their account of the situation, and, more often than not, a misunderstanding is identified and a compromise is reached. The tension at the beginning of the meeting has evaporated. It’s incredible to witness the impact direct communication has in diffusing conflict.

Before I interned at the New York Peace Institute, I had never heard of mediation. I didn’t know that there were community agencies that existed for the sole purpose of giving others the opportunity to resolve their conflicts in a safe and supportive environment. It is truly a gift to come to work every day and witness families that have been wrenched and jerked by the court system sit down and speak freely for the first time to their loved ones.

*Client name has been changed to protect confidentiality.