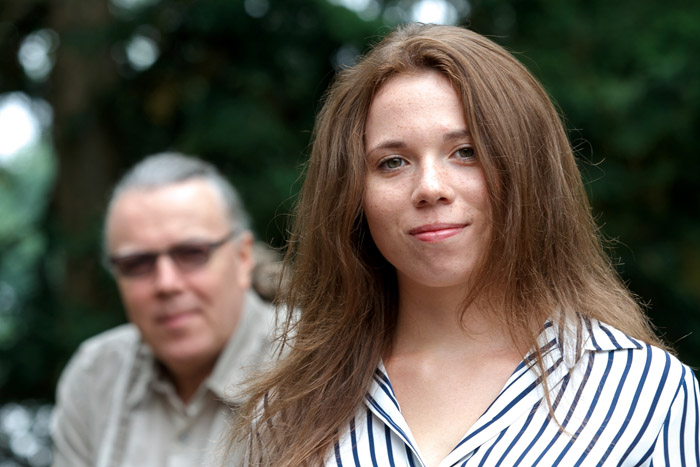 Two years ago, Norwegian high-schooler Thera Iversen had no idea that her family played a distinguished role in the history of an American college. But when she came to Dickinson this fall as a member of the class of 2017, she opened a new chapter in a story that began nearly a century ago, when her great-grandmother, Esther Popel Shaw, class of 1919, descended the steps of Old West.

Shaw made history in 1919 as Dickinson’s first-known black woman graduate. A member of Phi Beta Kappa, she earned the Senior Patton Memorial Prize at Commencement and went on to become a noted poet-activist whose close friends included poet Langston Hughes. In 1945 Shaw urged her daughter, Patricia, to apply to Dickinson. Although Patricia was admitted, the two were surprised to learn that she was not permitted to live in the all-white campus housing.

Patricia Shaw Iversen decided to attend Howard University instead and then moved to Norway, where she married and raised a family. But for her mother, the conversation had just begun.

“I am grateful … for your courtesy in keeping open for discussion [the question of] race relations at Dickinson College,” Shaw began in a letter to President Boyd Lee Spahr. She then advocated for integrated housing and equal-opportunity admissions, corrected Spahr’s assumption that few people of color had attended Dickinson and asserted that “thoughtful people do not refer to Negroes by the word spelled with a small ‘n,’ [because] such expressions are offensive, from the Negro’s point of view.”

“What’s amazing is that Esther struck up this correspondence because she wanted to educate him,” notes Joyce Bylander, vice president for student development. “She wanted to effect social change.”

Over the decades, Shaw’s legacy faded from institutional memory, but it came back to light several years ago, when Sharon O’Brien, professor of English and American Studies and James Hope Caldwell Professor of American Cultures, identified Shaw as Dickinson’s first-known black woman graduate. O’Brien contacted the family to learn more; the query turned into an oral-history project and many conversations. And in April 2012, the college bestowed a posthumous honorary doctorate on Esther Popel Shaw in recognition of her extraordinary career and invited the family to campus for the ceremony.

It was during that ceremony that President William G. Durden ’71 made a public apology on behalf of the college for its treatment of Patricia Shaw Iversen. “There was a real sense, among these descendants of Esther Popel Shaw, of belonging to this community — of coming home,” says O’Brien, who sat with the family during the ceremony. “There wasn’t a dry eye in our row.”

“It made a very big impact on my family and me and made the whole fascinating story of Esther Popel’s life even more meaningful,” Iversen adds.

Iversen will carve a path that is clearly her own, in a world that is vastly different from the one Shaw knew. Iversen enjoys traveling, designing Web sites and publications, creating videos and going to the movies. She is social-media savvy—Bill Murray’s tweets make her laugh—and she names Kurt Vonnegut and Charles Bukowski as favorite authors. While Shaw rallied for social justice in 20th-century America, Iversen springs from another time and another nation’s collective memory. And while Shaw’s skin color identified her as African American, Iversen’s does not; the African American experience is part of Iversen’s family history, but not her daily life.

Still, there are glimmers of Shaw in view. Iversen plans to major in art history because she’s fascinated by the ways that culture, history and the arts intersect. She hopes to minor in Italian—a nod, perhaps, to the Italian relatives on her mother’s side of the family with a second minor in writing, a choice Esther would surely have understood.