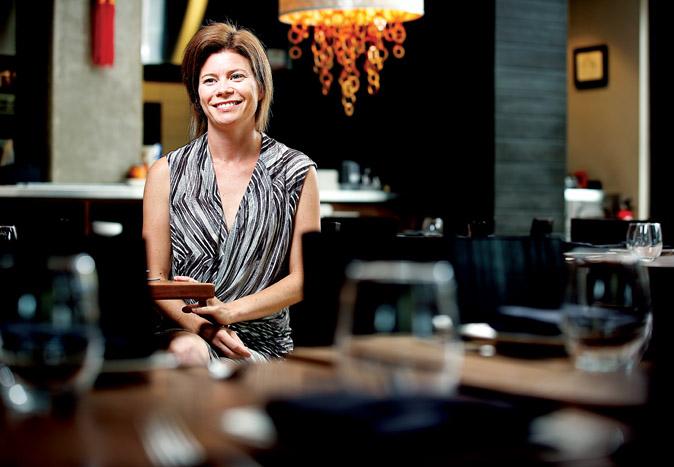 Alicia Pokoik Deters ’98 has a superb palate. But when she visits a new restaurant, it’s not the food that captivates her. It’s everything else.

Deters is a restaurateur whose Colorado eatery has drawn rave national reviews. While her chef romances taste buds, Deters romances hearts and minds, creating a space that places the meal into compelling context and, ultimately, brings visitors back for more.

Her success is built on a keen grasp of both the art and business of her industry — the fruits of a nontraditional career path that began during her junior year abroad.

At the start of that year, Deters had no clear career plans. She harbored an interest in building development, born from summer jobs in her father’s real-estate office, and she enjoyed her accounting classes. “Beyond that, I had no idea what I wanted to do, except that I didn’t want to sit at a desk all day,” she recalls.

In Toulouse, when Deters signed up for a French cooking class on a lark, she discovered her passion. “We learned recipes, how to chop, how to select fresh ingredients — and I just loved it,” says Deters, who also learned about the hospitality industry through an internship at a Toulouse hotel.

Back at Dickinson for her senior year, Deters secured a part-time job at a fine-dining restaurant. And after graduation, she enrolled at the Culinary Institute of America (CIA), where she earned a culinary degree and a fellowship and completed internships in and out of the kitchen.

“I decided early on that if I was going to do this, I’d do it all the way,” says Deters, who went on to work for celebrity chef Rick Moonen for nearly three years. On realizing that her true calling lay in restaurant management, she enrolled at the University of Denver and earned an M.B.A./M.A. in real-estate and construction management.

Meanwhile, back East, Deter’s friend and fellow CIA alum Lon Symensma was making his own mark as a high-profile Manhattan chef. “We’d often said that it would be great to open a restaurant together, so after I had my degree, I flew out to New York to see if he was ready to make the move,” Deters recalls. He was.

So Deters crafted a restaurant that would best showcase Symensma’s bold cuisine. Every detail mattered: the building’s dimensions, the tabletops’ sizes and finishes, napkin colors, glassware designs, portion sizes, kitchen layout, the ways that customer were greeted, the logo, the music.

Adding to the workload, Deters—who had married fellow entrepreneur James in 2004—had two small children and was pregnant with the third. She went into labor during the restaurant’s opening party. “That was a little crazy,” she admits with a laugh.

But the work paid off handsomely: Within six months of its 2010 launch, ChoLon Modern Asian Bistro was a James Beard -finalist for Best New Restaurant in America. Details -magazine listed it among the Top 10 New Asian Restaurants in the country.

Today, ChoLon is well established, and Deters recently launched a Denver café. She enjoys spending time with her husband and children, ages 8, 6 and 3, and her volunteer work includes a construction-planning project for the local school.

Asked for career advice, Deters stresses the importance of education, exploration and openness to change. “For me, that started at Dickinson, because that’s where I was able to explore and find out what I loved,” she says. “I just built on that and kept going.”