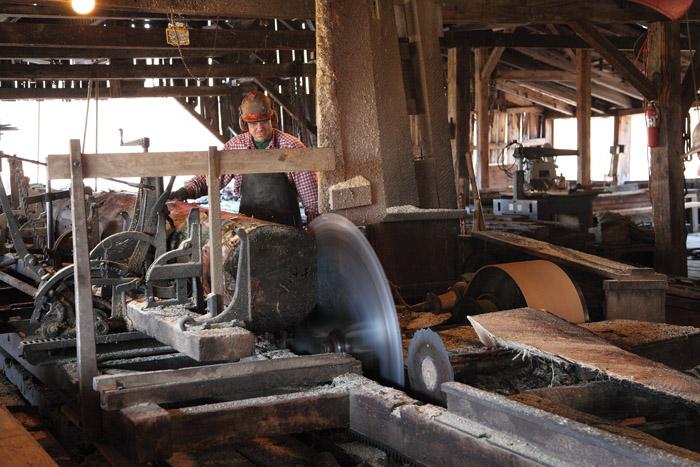 Fifty years ago, the average size for a new home was about 1,200 square feet. Fast-forward to the McMansion era, and today the average size is more than double that. Many of those behemoths now sit empty and abandoned, and more prospective homeowners are signing on to a new philosophy of building better, not bigger.

For Dana Southworth ’93, that ethos was ingrained at an early age, when his father and uncle bought Garland Mill in Lancaster, N.H., northwest of the White Mountains and about an hour shy of Canada’s border. Built in 1856 and listed on the National Register of Historic Places, the mill is one of only a handful of water-powered sawmills still in operation in New England. When the elder Southworths bought the mill in 1974, they expanded its operations to include designing and building timber-frame (also known as post-and-beam) homes.

“I call it upstream green and downstream green,” says Southworth, “in the sense of using lots of energy-efficient practices and products — not the least of which is the waterpower-sawn timber.”

Dana and his cousin Ben spent much of their childhood working at the mill and three years ago took over the business from their fathers. Dana is director of operations, while Ben -handles design. The team of about 10 has worked on projects from Shaker-inspired furniture and a Tudor-style timberframe (Elf University) to a high-modernist house complete with a concrete floor and outdoor shower. The company has garnered numerous accolades, including a LEED platinum certification for a renovation project.

Yet when Southworth, a history major, graduated from Dickinson, he had different plans. “There was no pressure to follow the family business,” he recalls. “In fact, my father wisely said, ‘It’s a very wide world, and you’re going to be a lot more of use to us if you come back with some miles and experience under your belt.’ ”

Southworth took his father at his word: He studied abroad at Dickinson’s -program in Bologna, and then earned a -master’s in international studies from the University of London. Soon after, he took a post in Eastern Europe for the Center for International Private Enterprise, a multi-national nongovernmental agency that -supports security and economic development in newly democratic countries.

But when he was faced with the choice between continuing to work abroad — and leaving his family behind in the States — or settling into a Washington, D.C., lobbying position, he looked north. “I have always felt a real appreciation and a need to use my hands as well as my mind in whatever I’m trying to make work,” he says. “Even though the intellectual stimulation of the prior work was fulfilling, I did find the need to have the hands-on, tangible aspects that weren’t there.”

The move was the right fit. The company remains small — intentionally so — and much of the work comes its way by word of mouth. “There’s a strong family continuity here,” he says. “My cousin and I grew up together — it definitely wouldn’t be the business it is without him as a partner.”

As for the next generation, “we each have a couple of kids — the older boys are 11, and they’re starting to work with us on tasks here and there,” he says. “I hope I have the foresight and character to tell them the same thing my father told me: Follow your ambitions and ideas. Get out there and live a little.”