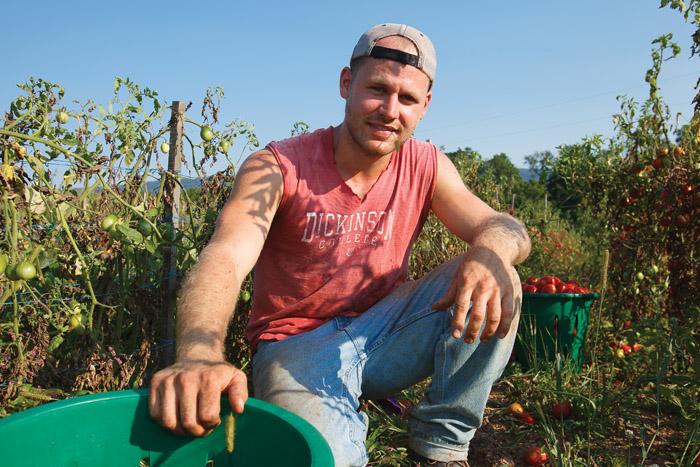 Alex Smith ’10 stood knee deep in a row of broccoli cursing at flea-beetles. His customers had been raving about his produce, but now this horde of tiny metallic-black insects was invading, gnawing holes in his crops and frustrating every attempt to remove them. Wiping the sweat from the back of his neck, Smith glared at the dark specks popping from plant to plant and decided he’d had enough.

“I was like an angry mama bear out there,” he recalls. “I shouted, ‘I don’t care about organic anymore. I’m gonna nuke you!’ ” But even as he said it, he knew he couldn’t do it. “Nuking” the insects with a pesticide would go against everything Smith stood for, everything that drove him to put in 80-hour weeks tending his crops, everything that made him want to become a farmer.

That seed was planted six years ago at Dickinson when Smith met College Farm Director Jenn Halpin. A conversation on why Halpin began farming led him to major in environmental science and decide to make a difference with his hands.

“When I was at Dickinson examining all the crises that plague our society, consistently at the center I saw food,” he explains. “Organic farming struck me as a way to throw a wrench into all the vicious cycles generating problems in nutrition and sustainability. It was an opportunity to work with my hands and be connected to the earth.”

Today, after a two-year internship at the College Farm and a season on the crew at Spiral Path Farm helped prepare him to make the most of that connection, Smith has launched Purple Sol Farm. The growing community-supported agriculture (CSA) venture based in Perry County, Pa., serves two dozen families and two restaurants in Baltimore, Smith’s hometown. And it demands a seven-day work week of tending to his crops, -delivering them to his customers and helping to care for the animals on JuJo Acres, the larger farm on which he rents land.

“When people find out how much I work, they usually ask me how I do it,” he says “But I look at it this way—when most people get out of work, that’s when they do something they love. When I get done with my day’s work, I keep working because that is what I love.”

The ability to unite his passion with his day job is one way Smith says his education has paid off. The other brings us back to those flea beetles. “I see Dickinson as a direct investment in my farm,” he says. “I might not be using the Latin name for the meadow vole or an equation I picked up in Statistics 101 every day, but the process of chipping away at something until I understand it—that stays with me.”

So instead of going nuclear on the -beetles, Smith chipped away. “I went inside, got on my computer, made a ton of phone calls and learned everything I could about flea beetles,” he explains.

The solution was a four-pronged -remediation plan combining chemical (spraying the crops with a biodegradable flower extract), biological (planting a nearby flowerbed to attract insects that prey on flea -beetles), cultural (removing nearby weeds where the bugs could hide) and physical (draping certain crops with a floating row cover) measures.

It may have meant more work, but as Smith sees it, more work isn’t always a bad thing.

“Taking an organic approach to farming means always keeping the big picture in mind and remembering that every tiny decision has to drive that big picture,” he says. “So it might take less time to use a pesticide, but there’s a price to be paid on a larger scale. And besides, I tend to think that the more energy I put into the food, the more my customers get out of it.”