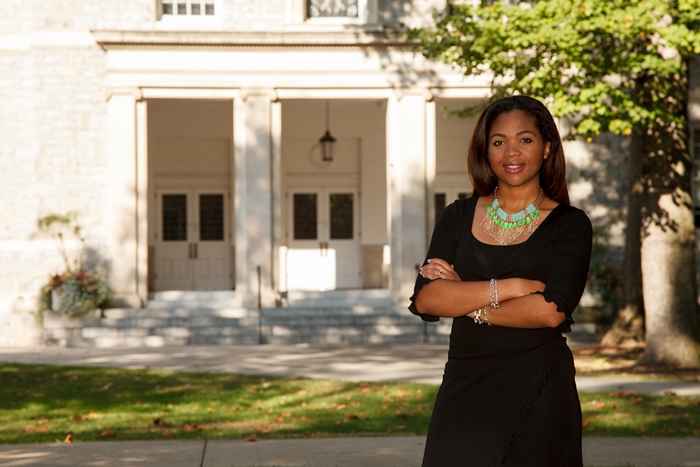 In early January 2010, Diamond McClintock '14 was a high-school senior with no clear vision of what the "right" college for her might be. She visited Dickinson just one week before the Early Decision deadline, not knowing what to expect, but by the day's end, she knew she'd found a home.

"I learned that day that Dickinson valued the same things I value—service to the community, global engagement, committed professors and student leadership," says McClintock, who submitted her application just a few days later. "I couldn't imagine being anywhere else."

Since then, McClintock has distinguished herself as an enthusiastic learner, volunteer and student leader, serving as a Liberty Cap and Pi Phi member, a Women's Center and Carlisle Arts Learning Center volunteer, a multicultural-recruitment intern, an admissions student-interviewer and a studio-art assistant.

McClintock also spent a semester during her junior year studying art in Norwich, England. She has held two summer internships with an international luxury leather-goods corporation and is considering a career in human resources as a result of her experiences in that international-corporate environment. She also is gaining valuable professional skills through her involve­ment with the college's new television station, Red Devils TV (RDTV).

McClintock caught the RDTV bug when she was invited to host the station's inaugural show, "Hot Seat," during the 2011-12 academic year. She enjoyed being on camera and learning to edit video, and when she came back to campus last spring after a semester abroad, she was asked to serve as the station's president. She's now learning to produce shows and write for TV.

"It has been time-consuming, but it's also so rewarding to simply think up a show concept and then see it become a finished product," she says. "These are things I'm very passionate about but never thought I'd get a chance to do."

McClintock is quick to stress that opportunities such as these are only possible through the generosity of those who support her education at Dickinson.

"Not a day goes by that I do not recognize that I would not have what I have without the assistance of others," she says. "One day, I want to help other students get the education they deserve but cannot afford."

Your Gifts at Work