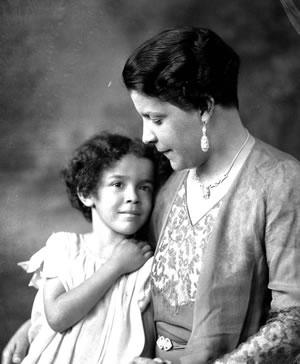 This portrait of Esther Popel Shaw ’19 and daughter Patricia hangs in the National Museum of African American History and Culture Gallery until Feb. 28 as part of the The Scurlock Studio and Black Washington: Picturing the Promise photo exhibit.

A few years ago I was talking with some students at the Zatae Longsdorff Center for Women. We reflected on Zatae’s story as the first woman to graduate from Dickinson. Suddenly it occurred to me that she was white.

“Who was the first African-American woman to graduate from Dickinson?” I asked. None of us knew. Here was an untold story: Could we find out?

The students did research in the archives and read up on the history of African-American women in college. I took a most unscientific approach to our project; college records did not indicate the race of students, so I looked through the yearbooks, scanning photographs to see if any of the female students looked black, well aware that an African American could also “look white.”

In the 1919 yearbook I came across the photograph of Esther Popel ’19, the first woman student, as far as I could tell, who “looked black.” An ambiguous photograph wasn’t sufficient evidence, so, along with the students, I tried Google. A long shot—why would Esther Popel, whoever she was, have a virtual presence? “Even if she’s on Google,” a student observed, “that probably won’t tell us anything about her race.”

We gathered in front of the computer as I typed in her name. “Wow,” a student said. “Amazing.” Esther Popel had several entries. Key words: “Poet of the Harlem Renaissance,” “anti-lynching poem,” “contributor to The Crisis,” “friend of Langston Hughes.” Our first known African-American woman graduate was an important part of black literary and political history. We needed to make her part of our history and to discover what stories she had to tell us. She had died in 1958, but her poems could speak to us.

Esther Popel was born in 1896 in Harrisburg, Pa. She commuted to Dickinson and thought well enough of her college experience to encourage her daughter to apply in the 1940s. She published her first book of poems, A Forest Pool, in 1934. These early poems were derivative and generic, resembling the lyric poems churned out by many other poets during the early 20th century. The subject matter was the beauties of nature, the rhymes predictable, the tone wistful. Any of Popel’s poems could have appeared in Willa Cather’s book of poems April Twilights. The narrators are indistinguishable because they are both imitating A.E. Houseman.

Fifteen years later, now married, Esther Popel Shaw was publishing in the important African-American journals sparked by the Harlem Renaissance and what has been termed the “long civil-rights movement.” She was part of African-American literary circles that included Langston Hughes; she now had a community of like-minded poets and had found her voice and her subject matter—race and racism were central themes in her work.

Her writing was bold, confident, at times angry. Her poems were political and powerful. She wrote about the central paradox of American history: the contradiction between American ideals of equality and freedom and the realities of black experience—slavery, oppression, segregation in Jim Crow America. She challenged her white readers and affirmed her black readers.

In one of her most powerful poems, “Flag Salute,”  she juxtaposed the Pledge of Allegiance to a scene of lynching so that her readers could see the difference between American ideals and black experience. Just as daring, she called upon her readers to ask, Are black people American citizens? Or is “Americanness” another “whites only” province?

And were black people able to be angry about injustice and violence, or did their yearning to be accepted as American citizens prevent them from seeing and feeling the horrors of lynching?

Shaw published other powerful poems on racial injustice in literary journals intended for black readers. In the years after World War II she addressed audiences of white women, straightforwardly describing white supremacy and black oppression and invited her white audience to join with blacks in fighting social injustice. In a talk she gave to the Lawrenceville, N.J., Woman’s Club she called upon her audience as mothers who could work to dismantle racism through the models they showed their children. “No child is born prejudiced,” she said. “What he becomes, how he develops is the responsibility of the adults around him, who shape and mold his life by the attitudes and examples they reveal in his presence.”

During the 1940s, Shaw expected that Dickinson College had addressed the “American Dilemma” of race, encouraging her daughter Patricia to apply. Patricia was accepted but received a letter saying, “We will arrange for you to live with a nice Negro family in town.” She could not live in the women’s dormitory, as this was a “whites only” space. Dickinson’s policy of racial segregation was not unusual at the time, and it continued for almost 20 years. Patricia and Esther were outraged. “I was so mad at Dickinson,” Patricia told me in a phone conversation several decades later. “I had wanted to go, but of course I wasn’t going to put up with that. So I went to Howard.”

We at Dickinson should be proud of Esther Popel Shaw and make her story part of our history. In doing so, we can celebrate her achievement as a poet of the Harlem Renaissance and a spokesperson for racial equality. At the same time we need to acknowledge the racism that created the “whites only” dormitory life and take a look at the ways in which our institution even now can foster white privilege. I think about the growth in diversity at our college over the last 10 years and the proliferation of courses addressing race issues in the United States, the development of programs like Crossing Borders and the Mosaic on Social Justice, and the recent founding of an Africana-studies program. I wonder what Esther Popel Shaw would think of this.

Let us honor Esther’s legacy and hear her words. Let us teach Esther’s poems and her writings on race. Let us keep working toward racial equality and social justice.

We can’t invite Esther to come to Dickinson. But we can invite Patricia Shaw Iversen, the young woman who received the insulting letter, now a feisty woman in her 80s. And we can ask her to bring her children, Esther’s grandchildren. For Dickinson is part of their family history, just as their stories are part of ours. Let us exchange stories.

Sharon O’Brien, the James Hope Caldwell Professor of American Cultures, was an early advocate of women’s studies, which began as a certificate program at Dickinson in 1991. On Feb. 18 she is speaking on Esther Popel Shaw’s place in literary history as part of the Women at Dickinson College: 1884-2009 celebration.

(Note: In a classroom in a Negro school a pupil gave as

his news topic during the opening exercises of the morning,

A brief discussion of the facts of the case followed, after

which the student in charge gave this direction: pupils, rise,

and give the flag salute! They did so without hesitation!)

“I pledge allegiance to the flag—

“They dragged him naked

“Through the muddy streets,

“And the charge? Supposed assault

“Upon an aged woman!

“Of the United States of America”—

“One mile they dragged him

“A rope around his neck,

“Left dangling by the patriotic hand

“Of Nordic youth! (A boy of seventeen!)

“And to the Republic for which it stands”—

“And then they hanged his body to a tree,

“Below the window of the county judge

“Whose pleadings for that battered human flesh

“Were stifled by the brutish, raucous howls

“Of men, and boys, and women with their babes,

“Brought out to see the bloody spectacle

“(Three thousand strong, they were!)

To make the tale complete

They built a fire—

What matters that the stuff they burned

They cut the rope in bits

And passed them out,

For souvenirs, among the men and boys!

The teeth no doubt, on golden chains

About the favored necks of sweethearts, wives,

And daughters, mothers, sisters, babies, too!