Things That Can’t Be Said Any Other Way 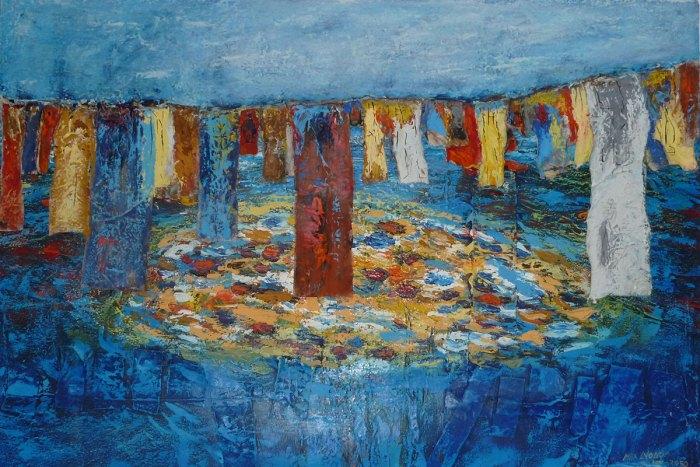 The Global Clothesline Project commemorates its 20th anniversary at Dickinson

Women and girls come together to transfer their experiences onto T-shirts to exhibit around the world. The designs swirl and twist, forming words and shapes. But their bright colors are full of dark meaning: White represents women who died because of violence; red, pink and orange are for survivors of rape and sexual assault; purple represents women attacked because of their sexual orientation.

What Oscar Wilde said about art being the most intense mode of individualism that the world has known has never been truer than with the Global Clothesline Project.

From one to many

But the Global Clothesline Project seeks both to honor and move beyond the individual experience to raise awareness about gender violence.

"It works for individuals on the therapeutic level, where people can express through images what they may not be able to say," says Susan Rose, the Charles A. Dana Professor of Sociology and director of Dickinson's Community Studies Center. Rose co-founded the Central Pennsylvania Clothesline Project via the Women's Center just three years after the national project was launched in Cape Cod in 1990. "It also works collectively, so part of it is knowing that you're not alone, both in making the shirts and then displaying them," she says. "This is not just an individual issue but a social issue as well."

The violence depicted on Clothesline's T-shirts—in images ranging from ripped-out hearts to tears—is prevalent worldwide, but the project's network is continually raising awareness and creating safe places for dialogue to emerge.

One of the newest safe zones, in fact, is the Susan Rose domestic violence shelter in Roosendaal, Netherlands. The shelter was named for Rose after the first Clothesline workshop she facilitated in the Netherlands became a nationwide project, with all 23 domestic-violence shelters contributing to an open-air exhibit in the Hague.

Rose notes that numerous Dickinson students have been involved with the project over the years, from filming, editing and translating interviews to working with Take Back the Night to organize and participate in vigils, conferences and Clothesline events. They also have conducted workshops in Venezuela, Bosnia and Cameroon and with diverse groups of women in the United States. They find that the issue of gender violence transcends any perceived borders; also transcendent is the healing that takes place through the simple act of making a T-shirt for a Clothesline exhibit.

"When you have a clothesline in the social hall at Dickinson or in a church or synagogue or mosque or by the well where people wash their clothes, it's a safe way for women to talk about their experiences and what's happening," Rose says, noting that the shirts are often displayed anonymously. "The impact of so many shirts often opens up a much larger dialogue about gender violence, which gets through the pain to the healing and action."

"The women and girls involved exemplify the resilience of humanity," says Oanh-Nhi Nguyen '13, who edited Challenging Global Gender Violence: A Clothesline Documentary on Bearing Witness to Violence Against Women and Children. "Their stories propelled my career goal of working toward violence prevention."

The film features Clothesline participants from around the world talking about their experiences with violence and healing, all of which, says Nguyen, "affects not only the victims but their families and our communities as well."

"It's not just about being focused on an issue but about having that kind of interaction, connecting individual lives, which makes it all the more real," says Rose, who also is bringing the issue to bookstores in December with Challenging Global Gender Violence.

"Violence against women and children is the most pervasive human-rights violation and a major public health issue," Rose says. It's unfortunate but likely that that very pervasiveness is what makes the project so effective across borders, across cultures, across whatever else people may think separates one human being from another.

"Education is key," Nguyen says, getting to the heart of the matter with three simple words.