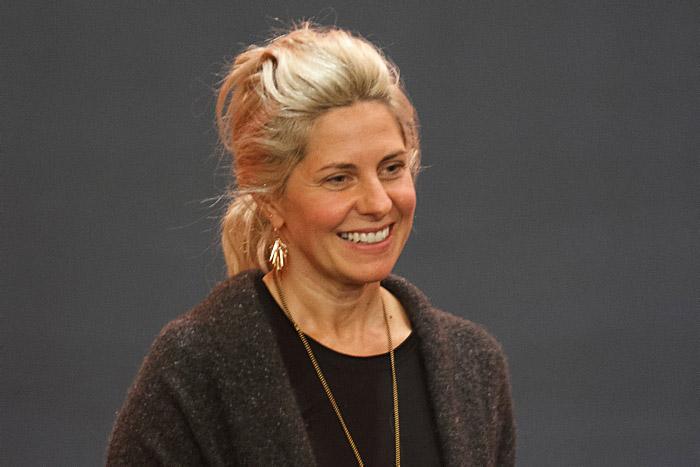 Amy Nauiokas speaks to attendees about her film and the film industry.

Amy Nauiokas '94 came to campus last week for a showing and discussion of The Inevitable Defeat of Mister and Pete, a film on which she served as executive producer through her production company, Archer Gray. The film, which has a 90% positive critic rating on RottenTomatoes.com, follows 14-year-old Mister and nine-year-old Pete as they fend for themselves in New York City in the absence of their single mothers, both of whom are drug addicts.

It's a story that has been resonating with audiences as well as with critics, and that's the seed of getting a film project to take flight, both artistically and financially, according to Nauiokas. "You have to have a good story," she told the audience. "If you don't have a good story, it's going to be virtually impossible to get the movie made and virtually impossible to secure financing." As executive producer, it's Nauiokas' job to ensure that the creative vision of the filmmakers is realized on screen—both on time and on budget.

Loaded with such notables as Jeffrey Wright (Casino Royale), Jordin Sparks (American Idol) and Jennifer Hudson (Dreamgirls), Mister and Pete premiered at the 2013 Sundance Film Festival. The story carries the audience through a sweltering summer, with the boys on the run from Child Services with no money, little food and an uncertain future. Driven by the two lead roles, both of which are inhabited by first-time lead actors, it's a film the New York Post refers to as "gritty, sometimes downright heartwrenching."