Up for the Challenge 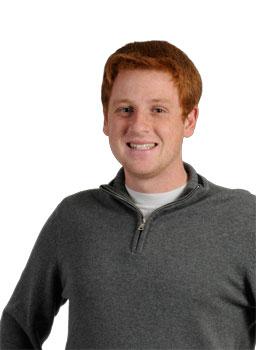 David Cochrane '14, a double major in music and Russian, is a referee for the U.S. Soccer Federation and a ski-patrol emergency responder. He's also a summer-tour guide, a gifted singer and conductor who serves as campus-ministry musical director for weekly Masses at Dickinson.

It's lunchtime on a drizzly day, and summer tour guide David Cochrane  '14 has just emerged from his first tour of the day. For someone who has just walked backwards across campus in the rain—simultaneously answering questions, pointing out landmarks and sidestepping the gathering puddles in his path—he is remarkably cheerful.

"It's crazy for tour guides in the summer—almost as busy as during the academic year," he says with a laugh. "But I like to be busy."

That much is clear: Cochrane, a double major in music (with a concentration in conducting) and Russian, routinely juggles diverse passions—for music, languages, athletics and more—with marked enthusiasm and determination.  And a little drizzle is not going to get in the way.

From player to ref

In between classes, tours and other on-campus obligations, Cochrane is a grade 7 referee for the U.S. Soccer Federation who flies across the country to call high-level youth tournaments and Region I games.

A soccer player since age 5, he began to investigate refereeing at age 14; his interest intensified when a broken leg placed him on the sidelines a few years later. Over time, Cochrane learned the ropes by calling recreational leagues, then moved up to regional youth and adult tournaments. His goal is to eventually work part time as a national referee.

The rising junior also is a state-certified first responder and longtime ski enthusiast. In winter, he works as a ski-patrol outdoor-emergency-care technician at a resort in northern Pennsylvania.

And then there are his academic interests—music and Russian—which date back to his pre-Dickinson days.

Cochrane began to study Russian as a middle-schooler, while he and his parents prepared to adopt his younger sister, a native of Russia. "At first, I just learned essential phrases, like, 'Are you hungry?' and 'Are you hurt?' It just took off from there," he recalls. Four years later, he had become so advanced that he won a gold medal at Temple University's Delaware Valley Russian Olympiada, a regional Russian-language competition for high-school students in Pennsylvania and New Jersey. He will further sharpen his language skills when he studies in Moscow this year.

A musician since middle school who led a children's choir in his hometown church, Cochrane decided to take on a self-developed music major in part because of his volunteer post as musical director of Catholic Masses at Dickinson. He said that the experience quickly tested his musical and interpersonal skills, particularly when he was called upon to put together a program of music for a Catholic bishop's visit to campus during Cochrane's first year at Dickinson.

Cochrane recruited musicians from the campus and community and assembled a choir and a brass quartet for the occasion. Then came four months of rehearsal to ensure that all was perfect for the big day. "David really did a spectacular job," said trombone instructor Ron Axsom, who participated in the quartet. "It was a lot of work, and he showed a lot of leadership, particularly for a first-year student."

Cochrane hopes to one day funnel his passion for both of his chosen disciplines—and his love of teaching—into a career as a professor of music and Russian.

The harder the game …

When asked to pinpoint the key to his successes behind the conductor's podium, on the ski slopes and soccer field, and in the classroom, Cochrane stresses the importance of continual reassessment.

"Whether it's music or refereeing or ski patrol, after it's over I sit back and say, 'OK, we handled that [skiing] accident really well. That was a good soccer game, or a good concert.' Then I analyze it and see what we can do better," he explains.

But it's clear that there's more at play here than simple armchair-quarterback analysis. Asked to give an example of these thought processes at work, Cochrane points to a time last spring, when he assembled a musical group to perform a benefit concert at a local church.

"There was a point where we came across some challenges and I had to really sit down and plan the next steps—what the challenges were, exactly, and how we'd address them," he remembers. "I realize now that even though I didn't think of it as fun at the time, it actually became more fun for me as the job got harder, because it's the challenges in life that make life exciting."

"To put it in soccer terms, the harder the game, the more player management you have to do, the more fun it is."

So even when the weather does not cooperate for this tour guide as he leads an expectant group of parents and perspective students across campus, Cochrane wastes no time grousing. "I learned that when it rains hard, it's easier if you just take your shoes off. Problem solved!" he says with a laugh. "And it's turning out to be a great day."