The first recipient of the Fleeger Family Scholarship Endowment in Health Studies is pursuing a master's in public health at New York University with plans to earn a Ph.D. 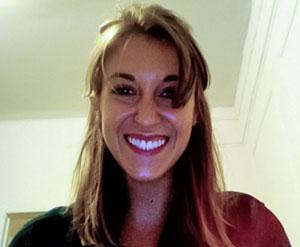 Five years in the making, the Fleegler Family Scholarship Endowment in Health Studies was launched in 2009 with a simple mission: to create opportunities for Dickinson students who want to make a difference in the health care profession and demonstrate an exceptionally compassionate approach to patient care. Today, the endowment's founder, Edward Fleegler '73, can see the fruits of his labors unfold as the first endowment recipient, Caitlin Ruggeri '12, embarks on a promising career in public health.

Ruggeri came to Dickinson with plans to major in international studies, but had second thoughts after taking a sociology course as part of her liberal-arts requirement. "I loved the idea of a discipline centered on trying to understand human interactions, systems and the social worlds we create for ourselves," she says. "I was hooked."

She applied that new knowledge of social constructs to healthcare issues during a junior-year seminar, in which she had an opportunity to conduct oral-history interviews with people living with HIV/AIDS. It was a career-defining experience. "[The patients'] stories were painful, yet full of resiliency, and I wanted to know more about this illness that had completely altered their lives," Ruggeri recalls. "I wanted to do something that would allow me to be a part of the solution to the many health crises that face our global community."

That goal strikes a chord with Fleegler, a physician specializing in geriatrics and internal medicine who now works in medical administration. He established the scholarship in honor of his parents, who instilled in him a commitment to compassionate, patient-centered care.

"My father was a general practitioner, and he gave me the perspective that population health is critical to an individual patient's overall health—that we must not overlook the social, economic and psychological struggles that influence patients' physical issues," Fleegler explains, adding that Ruggeri's compassionate approach to health issues—and her senior-year research on the effects of stigma on HIV/AIDS patients—dovetails perfectly with this view. He's gratified to know that the endowment helped support out-of-classroom learning opportunities such as conferences and workshops during her final year at Dickinson.

Today, Ruggeri is studying the systems that support HIV/AIDS patients as she pursues a master's degree in public health at New York University. She hopes to earn a Ph.D. in the field and then work to influence health standards and practices that directly affect both public health and individual patients' daily lives, such as safer-sex programming and needle-exchange programs that significantly reduce the rate of HIV transmission among drug users.

In the meantime, she's grateful for the experiences and opportunities that have led her to this path, saying, "I know that Dickinson has prepared me well to succeed, and I can't wait to see what the future has in store."