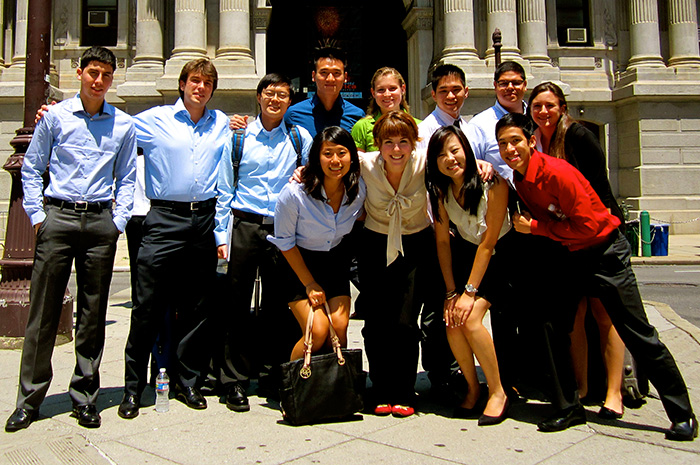 The interns drew on their backgrounds in world cultures and languages as they performed skilled work within the corporation’s global-financial division. They also took advantage of exceptional career-building resources, including lunch sessions with senior managers and intern-networking events.

Leah McNamara '13, a double major in economics and international business & management  (IB&M) who is fluent in Russian, began training just two days after returning to the U.S. from a semester in Norwich, England.

But she didn't let a little jet lag and culture shock slow her down.

"There was a lot to learn, but the training was excellent, and I got my bearings quickly," says McNamara, adding that the two-day training session included an introduction to division managers and a group teleconference with Wells Fargo's CEO. "They definitely invested in human capital."

Throughout the summer, McNamara wrote credit, underwriting and bank analysis for a Russian customer and translated documents for analysts in the company's Philadelphia office. She will begin a permanent, similar position at Wells Fargo in the fall.

It was the global atmosphere that cinched the deal.

"You walk down the hallway, and everyone is speaking a different language—it's incredible," McNamara says, noting that she enjoyed chatting about Russian literature and ballet with Russian-born professionals in her office. "To be able to work in that kind of environment—and to integrate the Russian component with my goals in finance—is a dream for me."

Huaxia "Calvin" Du '13, a native of China, entered the program armed with a double major in economics and mathematics, fluency in several languages, advanced-accounting coursework and two on-campus data-analytics internships. He unpacked all of those resources at the Wells Fargo Charlotte, N.C., office.

Working as part of the company's risk-management team, Du built a portfolio-analytics tool that monitored and aggregated data about financial institutions around the world. The information was then converted into easily readable and cross-referenced formats, such as graphs or highlights, allowing users to see changes and trends as they emerged. Underlying and cross-referenced data could be accessed with a simple click.

"It was very dynamic," he says. "I enjoyed making sense of large data sets, creating a starting point for people to ask 'Why?' and then helping them figure it out. It was very rewarding when people told me, 'Hey, this is really helpful.' "

Trung Hieu "Hugh" Nguyen '14 hails from Vietnam and is an IB&M major who studied in Singapore before attending Dickinson and has held internships and volunteer positions in three countries. He interned in Wells Fargo's Philadelphia office.

He says the friendships he cultivated at Dickinson helped him feel right at home. "At Dickinson, you meet people from all over the world," he explains. "[At Wells Fargo], someone might mention something about Italy, and I could say 'I have a friend there, and this is what he told me about his experiences.' I was able to make many connections."

The students had learned about the internship opportunity last winter, when Chuck Silverman '88, Wells Fargo's global-financial executive vice president, worked with the Dickinson Career Center to initiate the recruitment process. A month later, Sapoch returned to Dickinson to interview the candidates.

Each intern agrees that the support they received from the Career Center and alumni has made all the difference as they prepare to embark on their postgraduation careers.

"John gave me a lot of opportunities to learn and grow, and I did things I never thought I could do as an intern," Nguyen says of his former boss. "He also showed me that Dickinson alumni are holding high positions in big companies—that Dickinson's name is out there. That's helped me become more confident about what I can achieve.

"I don't want to sound cheesy when I say this," he adds, "but this really was a life-changing experience."