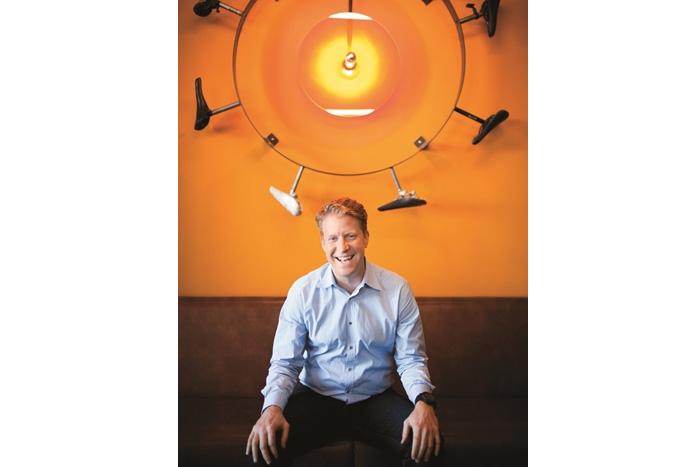 Google’s San Francisco office complex has one of those views. You know the kind: Yerba Buena and Treasure islands are planted out in San Francisco Bay. The Bay Bridge spans the sun-glazed water, stretching over to Oakland. But if you’re lucky enough to call this office your home away from home, to see this view every day, you might not even notice it after a while. In such a boat is Michael Lanz ’91, as he takes in the view yet again.
Google’s co-founder Sergey Brin famously said, “We want Google to be the third half of your brain,” and in part it’s Lanz’s job as industry director to make it happen. “A big part of Google’s mission is to organize the world’s information and make it universally accessible and useful,” he says. “So my team’s job is to partner with various companies and help them market better.”

Since 2001, Google has acquired more than 100 companies, many of them household names, such as Picasa, Android and YouTube. What Lanz does is use the companies living under the Google umbrella to help clients get more exposure to the consumer public.

“We take our products, like search and mobile and YouTube, and help make them more relevant and useful for a marketer to go out and engage with customers,” he explains. This often involves search options and tactical ad placement, features anyone who has ever uttered the phrase “Google it” knows well. But what most people surfing the Internet may not think about is the use of YouTube beyond watching “It’s Peanut Butter Jelly Time” and movie trailers—its strategic use. “If a client wants to get a brand message out about who they are as a company and what their brand stands for, they might want to get a message out there on YouTube,” Lanz says, and he and his teams swoop in with possibilities.

Lanz graduated from Dickinson with a B.A. in policy & management studies, and before Google he put that degree to use with such companies as Nielsen Online, Jupiter Media Metrix and Bechtel before becoming head of industry at Google in 2008 and industry director in 2012. And he likes it here.

“Google is an amazing company with an incredible culture,” he says. “The caliber of people you get to work with is outstanding, and Google gets to hire amazing, talented people who are really good team players. That combination makes going to work every day a really great experience.”

One of the other elements of Lanz’s position that makes going to work such a joy is the travel, a pastime he has enjoyed since his first trip overseas, while at Dickinson.

“Flying to Italy for my junior year abroad was my first time out of the country,” he says. “I remember landing at the Rome airport and meeting [physics] professor Neil Wolf and the rest of my Bologna colleagues, and we took a bus through Italy up to the Bologna Center. That began my year abroad, and I’ll never forget it.”

In 2012, Lanz trekked across the world as part of an Olympics-related assignment during the Summer Games, seeing Paris, London, São Paulo and Sydney, where he helped Olympic sponsors use Google technology to advance their sponsorships. He also recently took an international vacation, visiting Stockholm, Majorca and Paris. And while Lanz’s study-abroad experience paved the way for his love of travel, the education he received at Dickinson paved his professional path in general.

“It was incredible having the experience of the liberal-arts curriculum,” he says, “being exposed to different topics and courses, really learning how to think analytically and write, looking at things from different perspectives. It’s all helped me a great deal throughout my career in working with ambiguity.” The ambiguity he mentions comes into play when companies with which Google partners develop cutting-edge technology and the unprecedented suddenly becomes something he and his teams need to define and wrangle.

“You need to be comfortable with there not being a rulebook and just think critically about what might make the most sense moving forward,” Lanz says. “A liberal-arts education helps you see all the dimensions of a problem and how you might want to fix things and develop a plan.”

That usually involves thinking beyond the U.S. borders, as many if not most of Google’s clients—among them the world’s fastest-growing, most talked-about companies—want to expand their reach worldwide.

“If you think about a lot of the social networks out there, a lot of them have real global ambitions,” Lanz says, “and we help them expand their footprints around the planet. And that’s exciting, focusing on the international angle, especially given my Dickinson experience.”