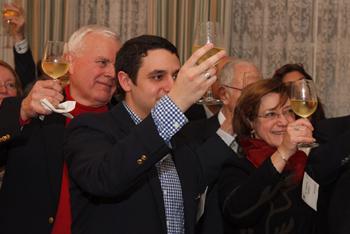 The Bow Tie Tour recently rolled into Washington, D.C., and President William G. Durden '71 and Dr. Elke F. Durden mingled with alumni of all ages and parents of past and current students at the Woodrow Wilson House. Celebrating Dickinson's momentum and President Durden's 14 years of leadership, the Feb. 27 event drew more than 80 Dickinsonians who gathered to wish the departing president well, listen to his thoughts on the future of the college and tour the historic venue.

Speaking to the importance of an engaged alumni community, Durden told attendees that he has always been an engaged alumnus and hopes others will follow. He then segued into what he calls "a public announcement for alums to help other Dickinsonians—especially current students," singling out Matt Hillsberg '13, a political-science major on hand for the event. "I asked alums to help the guy get a job. He was swamped with supporters."

Brian Kamoie '93 was one such supporter. "When Bill identified Matt as a bright senior seeking a position in public policy, I couldn't help but reply on behalf of the alumni: 'We'll take good care of Matt,' " Kamoie says. "The crowd was enthusiastic and very supportive of Bill and Matt, recognizing the introduction as the perfect example of why we were there celebrating Dickinson."

"The shout-out by President Durden is the best I have ever received," Hillsberg says. "Not only is it from one of the most respected and loved college presidents, but it was to a room filled with well-connected alumni. I was surprised and truly honored that he thought of me."

When not connecting students to alumni, Durden was making connections of his own. "I met some really interesting folks. A young alum said that Dickinson inspired him to get a master's in international relations at Johns Hopkins SAIS [School of Advanced International Studies] and an MBA and that he now works for Facebook," he says. "Another older alum works for the State Department and just came back from a year in Afghanistan, and another brought a book he just wrote on global flooding that is apparently getting a good reception. On and on. Great stuff! It was a truly gratifying and enjoyable evening."

The evening turned out to be gratifying for Hillsberg as well. "Immediately after President Durden ended his speech, I received six business cards," he says. "I've followed up with all of the alumni I met during the reception, and my next move is to develop my relationship with them as much I can. I truly thank President Durden for the thought. We'll all miss him here at Dickinson for all he's done for students, faculty, administrators, alumni and the college itself."