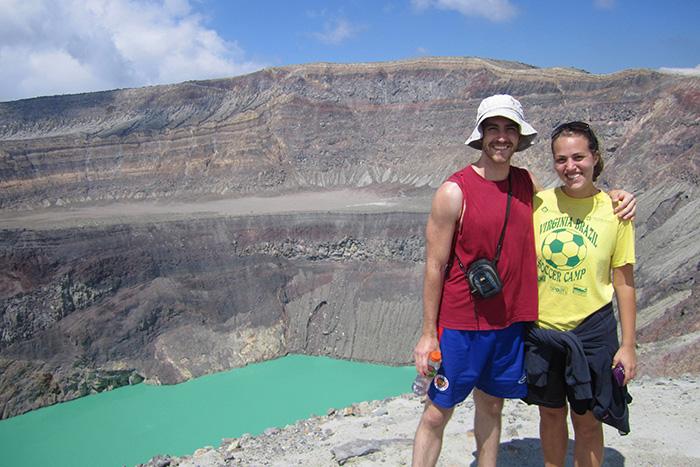 Peace Corps volunteers Brendan Hughes '08 and Lindsey Hazel '09 took some time to visit the Santa Ana volcano in El Salvador. Both chose the Peace Corps because of their interest in international development while working at the grassroots level.

Generations of Dickinsonians find promise in the Peace Corps

Ecuador. Guinea. Thailand. Madagascar. Niger. Moldova. Ivory Coast. Spin a globe and point to any of the 139 countries that have hosted the Peace Corps since its founding in 1961. Chances are you’ll find that a Dickinsonian has been there: 214 have served so far; 13 are in the field now.

One Peace Corps veteran, Tom Hull ’68, was responsible for Sierra Leone’s reopening to the corps in 2010. He had joined as a volunteer right after graduation; as the capstone of a 31-year diplomatic career, Hull returned to the war-torn country in 2004 as U.S. ambassador to help rebuild its civil society.

There he reunited with former students and neighbors, “many of whom had risen to high levels of government, most of whom had been refugees during the civil war,” he recalls. “I felt such gratitude in finding them alive and seeing that they were being very resilient. There’s an impact that the Peace Corps has, and sometimes it’s not evident immediately.”

Brendan Hughes ’08 recently wrapped up two tours as an environmental education volunteer—one in Paraguay and another in El Salvador, two of the least-visited countries in Latin America.

In both countries, Hughes focused on children and young adults—the environmental-science major led a youth group, organized Earth Day fairs at local schools, hosted a weekly environmental radio show and developed a school library. In between, he taught English and worked on learning a patois of Spanish and Guarani, an indigenous, primarily oral language. Hughes admits that he never became as proficient in Guarani as he had hoped, yet the hospitality of his friends and neighbors astounded him.

“I like to joke that I spent two years pretending to know what I was talking about,” he says. “The reality is that your local friends and community counterparts know way more about technical details and ways of doing things than we ever will. All of my projects would never have gotten off the ground without the knowledge and help of the community. The cliché is true: We as volunteers learn a lot more and are given more than we ever teach or give to our adoptive communities.”

After his two-year stint in Paraguay, Hughes decided he wasn’t ready to return to the U.S. and received a one-year extension in El Salvador. While there, he had the opportunity to visit Lindsey Hazel ’09, a volunteer in Costa Rica. In 2011, he gave an environmental talk at her community school; Hazel reciprocated and visited Hughes’ school in February to give a presentation on project planning and leadership to his youth environmental club. Now living in Washington, D.C., Hughes plans to study international development in graduate school. Knowing what he knows now, he takes the long view.

“A lot of volunteers are expecting their two years to be a great, romantic adventure while they save the world,” he says. “While it is an adventure, the romanticism quickly wears away. The Peace Corps is good at telling us fresh and very green college graduates that volunteers work in small ways … so your expectations of ‘saving the world’ are brought back down to earth when we realize how long it takes to get even the smallest projects off the ground.”

Hazel agrees, noting her own romantic notions before arriving in Costa Rica. “I thought working in the Peace Corps would be more similar to a study-abroad experience,” she recalls. “In addition to facing the normal challenges of a new job, there were challenges such as working in a different culture while living with far fewer comforts and amenities than in the U.S.”

From “how to prepare for a food sale when the organizers forgot to buy the food to how to ward off a violent goat chasing me on my morning jog,” Hazel credits her Dickinson experience with teaching her how to creatively problem solve and adapt to ever-changing conditions on the ground.

The international-studies and Spanish double major just wrapped up her two years in Costa Rica, where she has been training town committees in project design and management, teaching English and computer skills, as well as running library and environmental-education programs for children and youth. “The biggest issue that I’m facing is how to ensure the sustainability of long-term projects,” she notes. This fall, she will begin working on a master’s in international development at the Josef Korbel School of International Studies at the University of Denver.

Tom Hull recently came out of retirement to join the State Department for ad hoc assignments; he’s currently in Malawi to help the country’s new president, Joyce Banda. The former history major also takes the long view. “Although Peace Corps volunteers cannot individually change the world,” he says, “they do make a difference in the individual lives that they touch, and collectively they have made the world a better place. Dollar for dollar, the Peace Corps is America’s best foreign-affairs investment. The cost of a day of war in Afghanistan would cover most of the entire budget of the Peace Corps worldwide for a year.”