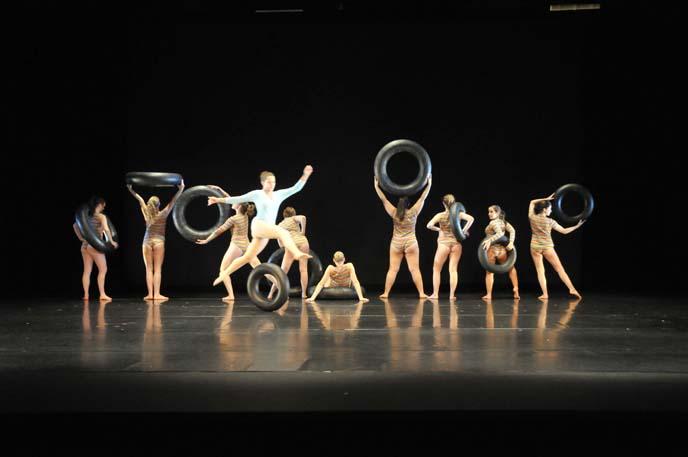 Constance Harris '13 was barely a year old when the 1991 beating of Rodney King exploded on international news outlets. So when she decided to choreograph a dance based on artist Danny Tinsdale's 1992 series on that subject, she wasn't sure, at first, how best to approach it.  "I wanted to explore the themes, but I felt removed from the material," she says.

Then she started to move. The resulting piece delves deep into that moment in American history, and it attracted some notice at last spring's American College Dance Festival. It is one of six provocative works highlighted in the Dance Theatre Group (DTG) 2012 fall concert, Five Under 40, an event that places dances by two student choreographers side-by-side with those of three young international luminaries at the top of their game.

According to Dawn Springer, postgraduate fellow in dance, Harris and fellow choreographer and Weiss Prize-winner Emie Hughes '13 work directly with Helen Simoneau, Jen McGinn and Gesel Mason to spotlight the diversity and vitality in the contemporary international-dance scene.

"It's an incredible experience for our student dancers and choreographers to work with these guest artists, because all three are in a hot moment in their careers," Springer says, noting that Simoneau interrupts a three-city, two-continent tour to come to Dickinson, and that McGinn comes to Carlisle via France. "Their work expands our notions of what is happening now, and what dance can be."

While Harris explores issues of the weighty issues of racism, gender and collective memory, McGinns comically thrusts ballerinas into a circus ring. Simineau brings a spirit of precision and exactitude to a French-inspired piece, and Gesel Mason fuses elements of modern West African flavor into the mix. Springer searches for laughter through tears by channeling an iconic figure in American theatre, and Hughes explores the ways we view the female form.

The lineup is a departure from tradition, since the fall dance concert typically features the works of guest choreographers, while the spring concert highlights the culmination of student choreographers’ yearlong work. Springer says she breaks from the norm to honor the graduating seniors’ exceptional work during the past three-and-a-half years. "Emie and Constance are extremely hardworking, and it shows. I wanted to make their work visible to the campus community," she says.

For Hughes, the collaborative nature of the work makes the hard work worthwhile. "What I love most about this process is working with the dancers," she says. "Each has a unique voice, and each is essential to the whole ... We all know that this work we are creating together is important, and that what we have to say needs to be said." For Harris, it's all about exploration and expression. "By meeting themes through movement, I’m able to make sense of them," she explains. "It's also a form of catharsis. Adrenaline levels are heightened, movement tends to be more physical and emotional. I’m able to extricate a radical voice.”