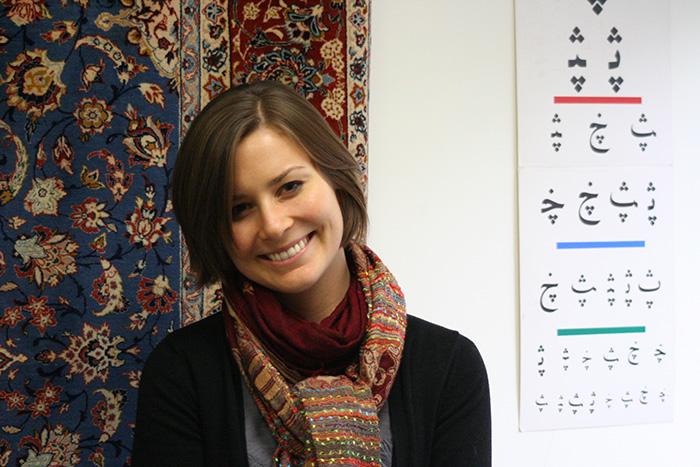 From Washington, D.C., to Jordan and Lebanon, Katie Kiraly ’11 dedicates herself to study of the Middle East

Katie Kiraly '11 describes herself as "a little nutty for grammar and language," and so she began taking Spanish and French in high school, dabbling in some Japanese and Welsh in her free time. She also got interested in Middle Eastern studies and Arabic during this period and became fascinated with studying various religions. So, she says, "Going into college, I figured I should combine my two main interests by studying Islam and Arabic, and it turned out to be a perfect marriage."

That perfect marriage has led her to a research assistant position with the Program on Arab Politics at the Washington Institute for Near East Policy (WINEP), a foreign-policy think tank in Washington, D.C., where she works closely with a number of senior scholars ("fellows"), providing them research support in English and Arabic.

"Sometimes the fellows will need help with long-term projects," she explains. "And sometimes I'll get a quick e-mail from someone on the way to a CNN interview and the title reads only 'Help!' Then I've got maybe five minutes to respond with the information he's looking for."

Before WINEP, Kiraly started from the ground up at Dickinson, building her own future in the setting of the college's international focus.

"I knew that I wanted to study a foreign language and eventually spend time abroad," she says. "Dickinson provided me with the opportunities necessary to do both, although when I first entered the school the Middle East studies program was nearly nonexistent."

Under the tutelage of Professor of History David Commins, Assistant Professor of Political Science and International Studies Ed Webb and the program's other faculty members, the committee went on not only to shape the major but to serve as a networking source, helping students reach out into the professional world to alumni working in relevant fields.

Beyond the networking benefits, Kiraly also cites her study-abroad experiences, including the four months she spent in Jordan through a program with AMIDEAST—an American nonprofit group with connections to Dickinson. There she studied Arabic, lived with a non-English-speaking host family and experienced the culture in Amman, all of which helped her to both land and excel at her job today.

What also may have added to the experience was being there while Middle East volatility flared, with both the Gaza flotilla incident and a visit by Vice President Joe Biden to Israel, during which Israel announced its intention to build several new settlements in the West Bank, "which many saw as a slap in the face to America," Kiraly says. "As anyone who's been to the Middle East can tell you, cab drivers are always some of the most garrulous sources of political chat in the Arab world, and there were multiple politically charged cab rides that spring."

From the buzzing atmosphere of Jordan, Kiraly next spent a summer at the American University in Beirut, in the Center for Arab and Middle Eastern Studies Summer Intensive Arabic Program, just as the Middle East entered a significant period of change.

"While I was there in the summer of 2011, it was the height of the Arab Spring throughout the Middle East, and everyone had been looking somewhat askance at Lebanon," Kiraly begins. "But a weird phenomenon of that country is that when the rest of the Middle East is erupting, Lebanon stays relatively stable."

When Kiraly began her journey at Dickinson, she saw herself one day working as an Arabic-English translator. But, she says, "after spending so many years studying Arabic and coming to understand how incredibly intricate Modern Standard Arabic is, I set my sights on moving to D.C. to work at a think tank or NGO that related to the Middle East, which is, miraculously enough, exactly what I ended up doing."

Another thing Kiraly ended up doing was working on "Who's Who in Egypt's Muslim Brotherhood" with WINEP's Eric Trager, an expert in the field whose writings have appeared in The New York Times, the Wall Street Journal, and The Atlantic, among others.

"We spent about nine months compiling miniature biographies of 33 Brotherhood leaders in Egypt, including current president Muhammad Morsi," Kiraly says. "This project illustrated the value of working at a place like WINEP, because I got to work very closely with Trager, who is one of D.C.'s foremost authorities on the organization of the Muslim Brotherhood."

With WINEP or a similar think tank on Kiraly's near-term horizon ("but in a fellowship position"), her future seems to be aimed squarely at continuing her work in Middle Eastern research, study and immersion. She has recently applied for a Fulbright grant in Jordan for the upcoming year and is also in the process of applying to the Center for Arabic Studies Abroad program in Egypt. "I'm hoping to spend a significant amount of time in the Middle East before I go back to school [to pursue a master's degree] to really cement my Arabic abilities," she says.

"My dream job would be working as a senior editor of a journal that deals with the politics of the Middle East. This goes back to my high-school roots in loving language and grammar," she explains. "For me, there's something so relaxing and almost comforting about editing a piece of writing, and I hope I find myself doing that as a profession."