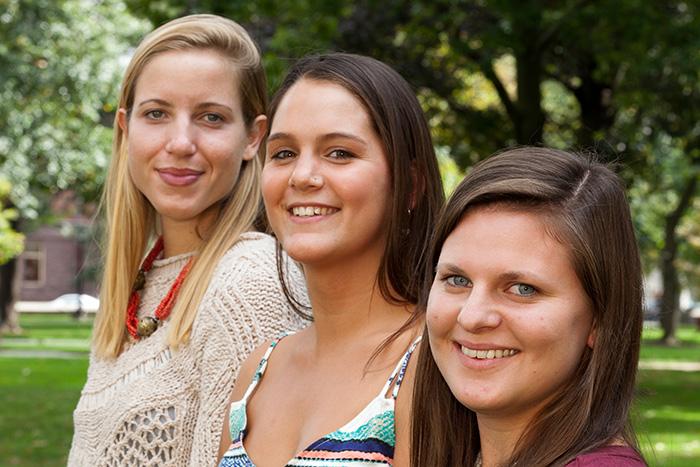 From their home base in Cameroon, three alumnae spread the word about women's empowerment, urban agriculture and microfinancing opportunities

Spending twenty hours on multiple flights might not quite get you to the other side of the world, but it might get you to another world entirely. If you're 2012 graduates Rachel Gilbert, Grace Lange and Sarah Wright, though, and you're touching down at Yaoundé Nsimalen International Airport in Cameroon, this is your world too—and it has been since your junior year at Dickinson.

Gilbert, Wright and Lange went to Cameroon during the spring 2011 semester with the Dickinson in Cameroon program, which allows students to develop an understanding of Africa on the whole and Cameroonian culture and society specifically. The experience changed the direction of all of their lives, and on Sept. 28 they visited Charles A. Dana Professor of Sociology Susan Rose's First-Year Seminar to discuss the program and how it's leading them back to Cameroon.

"I translated the testimonies of survivors of rape and sexual violence at the only women's shelter in Cameroon," says Wright, who graduated with a B.A. in French. "I had no idea what I was stepping into, but it sparked a huge interest in women's and human rights."

In November, the Dickinson alumnae will return to Cameroon to begin the first leg of Cameroonian Roots, a project they founded to propagate microfinance opportunities and lessons in urban agriculture and women's empowerment.

Gilbert, an environmental-studies major at Dickinson, found that her interest in sustainable agriculture got a jolt during two study-abroad trips and fueled the current endeavor. "I got really into it during the trips to Cameroon and then Cuba through a *Mosaic program* with Professor Rose," she says. "I learned about urban agriculture, and now it's something I hope to work on for the rest of my life—in Cameroon now through UTAMTSI. This is a door I never would have guessed would be opened to me."

Cameroonian Roots embraces and transcends the idea of "thinking globally and acting locally," operating chiefly through a partnership with UTAMTSI, a fair-trade, organic-coffee company. UTAMTSI works to improve the lives of the local Cameroonians and spread the word about fair trade and sustainable business practices. The three Dickinsonians, says Wright, were drawn back to Cameroon, back to UTAMTSI, "by our desire to engage in some kind of sustainable outreach, to give back in some way."

"People drink coffee every day," explains Gilbert, who will be teaching English and organic/urban-agriculture classes, "and most don't know where it comes from, so we want to get people to support companies like this."

To that end, Lange is acting as videographer and creating and disseminating public-relations pieces whose target audience, she says, is "the world—people who donate, people who are talking about these issues."

In Cameroon in 2011, UTAMTSI's CEO, Morin Fobissie Kamga, a native Cameroonian, told the students, " 'We're not just selling coffee; we're selling a lifestyle, one that builds more vibrant, sustainable communities,' " recalls Lange, who will be spearheading microfinance projects. "It was that quote that really stuck with us, that inspired us three broke college students to fundraise our own way there."

On either side of the limestone walls

"Going into this, we often found ourselves in unfamiliar territory," says Wright, who will be focusing her efforts on empowerment initiatives. "We were lucky with all the great resources at Dickinson: professor mentorship, the media center—so much help from all different areas. You don't necessarily have to go beyond the limestone walls: It's all here."

"We have all different areas of expertise, but happily they all work in the context of one community, so it's a nice harmony of interests," says Wright. "It's like we're forming this experience as clay, and we're trying to build something out of it, and we're also open to having this experience shape us as well."