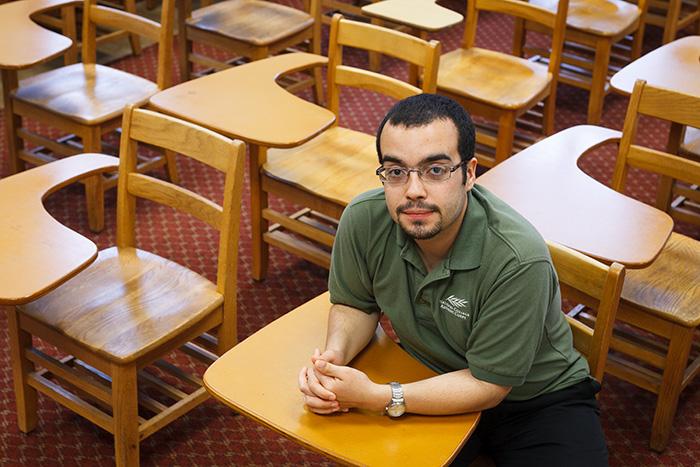 Gilbert Bonafé ’11 builds brighter futures, one student at a time

Growing up in government housing in Bronx, N.Y., it’s hard to envision a better future, let alone pursue it. But Gilbert Bonafé ’11 succeeded, and today he’s helping others do the same.

“My whole life changed because I went to college, and I want other students to have the same opportunity,” he says. “There are thousands of students out there who simply need someone to believe in them and help them find their way.”

Bonafé says he was always determined to get out of the projects, but college wasn’t a part of his plan. “I liked to read and I wanted to go to college, but I just didn't think it was possible,” he says. “I knew I couldn't afford the tuition. And no one in my family had attended, so I didn't even know how to begin.”

He got involved in the Upward Bound program and enrolled at a vocational high school with hopes of becoming an airplane mechanic. It was a solid career choice with good prospects, but as a mentor at Upward Bound told him, he could accomplish much more with a college degree.

The mentor, an assistant director at Upward Bound, recommended Bonafé for a scholarship, and out of 2,600 applicants, he was one of 12 awarded a full scholarship to Dickinson through the *Posse Foundation*. “That was the first hurdle—getting in,” Bonafé says. “Then the big challenge began.”

Like all first-generation college students, Bonafé entered college with a successful track record, having already beaten the odds of admittance, but his chances of graduating weren't stellar. According to a recent article in the Chronicle of Higher Education, one in three first-gen students is unsuccessful in the first year, and almost 90 percent fail to graduate within six years.

There are a constellation of reasons why. Most first-generation college students have no educational role models at home, few financial resources and little or no knowledge of college-admission processes. Many struggle with food insecurity, housing issues and on-campus jobs. They also are ill-prepared for on-campus life.

For Bonafé, as with many Posse students, the predominantly white student population at Dickinson represented new cultural territory. “It was a big change for me, because I came from a multicultural neighborhood, and I grew up in a Spanish-speaking household,” he says. “When I came, I spoke a lot of Spanglish and slang.”

The classroom presented even greater challenges. While Bonafé did well in his vocational school and was certified to fix airplanes, he had never written a research paper or used a microscope. “A class called American History Since 1877 was really tough, because the assumption is that you know what happened before 1877,” he says. “In my mind, the Civil War and Revolutionary War were all jumbled together, because no one had taught me these things. I had to catch up.”

Student-worker jobs in the Dining Hall and Career Center and extracurricular activities placed additional demands on his time, making classes all the more difficult. But with help from *fellow Posse students* and his Posse mentor, Associate Provost Shalom Staub, Bonafé graduated with Dean’s List honors. He even served as residential-education staff member and president of the Latin American Club. He also studied in Málaga, Spain, in his junior year and acted in a Dickinson *performance benefiting victims of Hurricane Katrina*.

“I had all of these great experiences because people encouraged me along the way,” Bonafé says. “I wanted to help other low-income students, but I wasn't sure precisely how. Then I saw a flyer in the Career Center for the National College Advising Corps (NCAC).”

Linked to AmeriCorps, the NCAC trains recent graduates to help low-income and underserved students enroll in college, then places them in high-need districts at no cost to the local schools.

Bonafé works in a high school in rural Greencastle, Pa., where most students come from high-school-educated families and about 20 percent qualify for the National School Lunch Program (NSLP). Many don’t have Internet access at home, and farm chores interfere with schoolwork and attendance. Bonafé reports that some students wake up at 4:30 every morning to milk 100 cows before school.

It’s a vastly different setting from the Bronx, but the basic challenges are the same. So Bonafé knows just how to help.

Bonafé creates and leads financial-aid, application and SAT-prep workshops and helps students identify a goal and find colleges that best fit their needs. He also alerts the school to special opportunities, such as SAT-registration waivers for NSLP recipients and educates students about on-campus culture. And because research indicates that students who visit campuses are more likely to enroll, he organizes field trips to colleges and universities.

Speaking at an NCAC conference last year, Greencastle student Savannah Fritz said that the results of Bonafé’s work are wide-reaching. “Before Gilbert’s help, I never thought about the idea of attending a top-tier school,” she said. “Now, I want to push myself and see all the options I’ll have if I work hard.”

When his two-year term as NCAC college advisor ends, Bonafé will pursue a master’s in higher-education administration so he can focus on improving retention and success rates for low-income college students. He also recently began a two-year term on the National Council of Young Leaders, a position that will allow him to advocate for low-income youth and communities at the policy level.

Meanwhile, he’s committed to making a difference, one student at a time. “It’s great, because students come in each week to show me their acceptance letters,” he says. “You just can’t find that kind of joy anywhere else.”